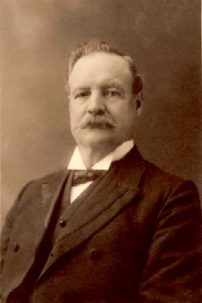 A native of Adelaide, Chanter’s parents were of English pedigree who had migrated to South Australia in 1840. By 1878 he was a farmer at Rochester and first secretary of the Victorian Farmers’ Union. Three years later, Chanter moved to Moama in New South Wales and opened an Auctioneer and Commission Agency continuing on a list of firsts – first mayor of the local council; first president of the Australian Natives’ Association in NSW (1900-01); and a founder of the Masonic Club in Sydney.

Like many federal politicians, Chanter had a stint in state politics – he represented the seat of Murray (1885-94) and later Deniliquin (1894-1901) in the Legislative Assembly. A radical protectionist, he was known as an advocate for the man on the land. He strongly supported Federation arguing that the Murray basin would benefit from a uniform tariff and in 1901 gained election to Riverina in the House of Representatives (1901-03, 1904-13, 1914-22).

“Tall and rugged, he was a quiet man” but a thorough and tenacious debater and as a hard-working rural politician Chanter was not a party hack, instead supporting those who embraced policies he had consistently argued for. Thus in 1910, he held Riverina as a Labor supporter and in 1917 as a Nationalist and Farmers’ candidate; in 1921 he supported the Severance Movement that was behind the push for the Riverina to become part of Victoria. In 1903 he narrowly lost his seat to Robert Blackwood (Melbourne General Cemetery), but was re-elected the following year after claiming electoral irregularities; the allegations were subsequently discredited.

(Image by permission of the National Library of Australia, nla.pic-an23646704)