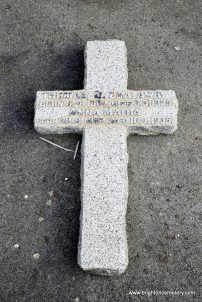 Thomas Chataway was born on 6 April 1864 at Wartling, Sussex, England the son of Rev James Chataway and Elizabeth née Drinkwater. Arriving in Sydney in 1881, he soon moved to Habana near Mackay working on the Queensland sugar cane fields before joining the Mackay Mercury in 1886; a decade later he was editor and manager of the Mercury and the Sugar Journal and Tropical Cultivator. Mayor of Mackay from 1904-06, Chataway later represented Queensland as an anti-Labour Senator (1906-13) during which he became a noted authority on matters relating to the “press, posts and telegraphs”. He was known as a conservative anti-socialist, pro-protectionist, and a vigorous supporter of the introduction of cheap Pacific island labour working the cane fields and clashed repeatedly with the Federal Labour Senator Thomas Givens (Box Hill Cemetery) who was strongly against. Described as “politically conservative and ardently protectionist” he later worked as Secretary to the Federal Opposition leader in 1916, and the following year served as personal assistant to Senator Edward Millen (Rookwood Cemetery) whilst Minister for Repatriation; Millen acknowledged that the arduous role “will kill me, either politically or physically”.

Chataway died on 5 March 1925 at his home 6 Balmerino Avenue, Toorak survived by his wife Anna née Altereith (born circa 1861 at Gempolkrop, Java, Indonesia), daughter of John Altereith and Eleanor née Latham (1831-1914). The Altereith family arrived in Sydney in 1873 on board the ship Brucklay Castle.