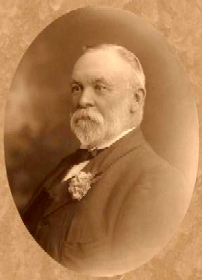 Born at St. John, Horsleydown, Surrey, England the son of Joseph Brown, a marine captain and Amelia née Tilley; in 1851 the family migrated to Australia. After his education at Geelong Grammar School (1856-59) where he won a number of prizes, Brown worked as a clerk with “Bright and Hitchcock”, a local retailer before joining the Bank of New South Wales in 1863; he later resigned in 1875 after an irregularity involving a subordinate was discovered. That year he opened a stock and station agency at Echuca with his brother-in-law. But like many leading men, politics was in Brown’s blood.

(By permission of the National Library of Australia, nla.pic-an23252118)