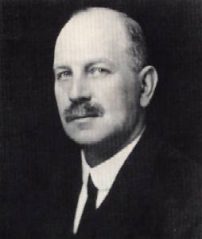 One of Australia’s great industrialists, Stewart was born at Wick, Scotland on 28 May 1876 the eldest of nine children to Robert Stewart, a ship carpenter and Sarah née Geddes. After his father’s death placed him in a position of assuming responsibility for the family, he gained his chief engineer’s certificate and while working with the “Aberdeen White Star Line” had the fortune to fall in love with Grace Cuming (later to marry on 4 January 1905 at Yarraville), whose father James (Footscray Cemetery) founded “Cuming Smith & Co” in 1875 that would later merge with the “Felton, Grimwade & Co” empire in 1897.

But rather than take advantage of marrying into a wealthy family, Stewart would make a name of his own. In an enduring partnership with fellow Scot William Fyvie (“Stewart & Fyvie”) that lasted over twenty five years they acquired the German patents and pioneered the industrial gas industry in Australia. In 1903 they were the first to demonstrate the use of an oxy-acetylene (welding) blowpipe; (Sir) Russell Grimwade (1879-1955) who was also keenly interested in the concept and for a time worked together with Fyvie and Stewart to develop the large-scale production of liquid air gas, but ultimately both went their own way and in 1911 Stewart formed “Commonwealth Oxygen Company” in partnership with “British Oxygen Company” (BOC) opening a plant at Alexandria in New South Wales. It wasn’t until 1935 that their companies merged to form “Commonwealth Industrial Gases Ltd” (CIG) (now “BOC Limited”) with Stewart serving as first chairman.

Knighted in 1937, for over three decades, Stewart served on the board of some of Australia’s major industrial organisations and along with WL Baillieu (1859-1936), Sir Colin Fraser (1875-1944), Sir Herbert Gepp (Kangaroo Ground Cemetery), Sir Walter Massy-Greene (1874-1952), William Watt (1871-1946) and others, was a member of the powerful Collins House group of business leaders that was formed to expand and safeguard common interests during a time of great uncertainty in the 1920s and 30s; very few outside the business world acknowledged Stewart’s power and influence. Among the notable companies he held directorships included “Broken Hill South Ltd”, “Electrolytic Zinc of Australasia Ltd”, “The Trustees Executors & Agency Co”, “Mercantile Insurance Co Ltd” and “Dunlop Rubber of Australia Ld”; at the time of his death he was chairman of six major Australian companies and a director of fifteen others.

Described as a “very private person with few interests other than business and family”, he resided at Cliveden Mansions – Wellington Parade, East Melbourne and died on 6 May 1956 aged 77. His estate was sworn for probate at £282,475.