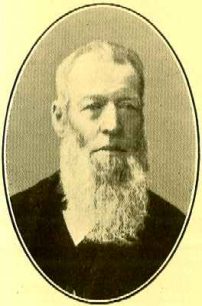 One of the founding fathers of the Wesleyan Church in Victoria and a pioneer of Brighton, Charles Stone was born in London on 4 August 1819, the son of Robert Stone (d 1875) and Elizabeth née Burrell. As a teenager, the family migrated to Van Dieman’s Land (Tasmania) landing at Hobart Town in April 1834 after a tedious voyage of nearly eight months where they spent the next three years. It was here that Stone, in his own words “found peace through believing in Jesus my Saviour” and made his “first attempt to preach at Roseneath, a few miles from Hobart, in June 1838”. Soon after he left for the young Port Phillip settlement in November 1838 where he “exercised his gifts by feeding the little flock” and spent a period at Little (East) Brighton on Henry Dendy’s (Walhalla Cemetery) Special Survey. In October 1841, Stone moved to Williamstown opening a day school, “athirst for knowledge” dedicated and committed and “often rose a three o’clock to ready and study”. Returning to Brighton four years later he taught for the next six years and later established business as a gardener and florist in Union Street (Hawthorn Road); his advice during the introduction of Public Education was keenly sought. “Uniform in temper and kindness”, Stone was an original Trustee of the Brighton General Cemetery (1854-98) and a local Councillor (1861-64). Writing in “A Century of Victorian Methodism”, the Rev Sir C Irving Benson (q.v.) said of Stone;

“he was a greatly respected figure in the community, a trusted confidant of many, advising them in matters of law, making out their wills, prescribing medicine for their ailments, and the blessing of the peacemaker was his. There was a beautiful balance in his Christian character, gracious and tender, yet strong in principle and mighty with God” while the local Brighton Leader commented “his sterling character, fidelity to principle, and his unvarying integrity made him a power for good…no one could justly charge him with uttering a discourteous word, or performing an unkind action”.

He died on 13 August 1898 survived by his wife and large family of four sons and six daughters; his marriage to Emma née Hurlstone (d 1901) in 1839 was one of the first performed in the colony while his death removed one of the last direct links with John Batman. Many old residents attended his funeral to pay their last respects which was said to have been one of the largest processions in the district.