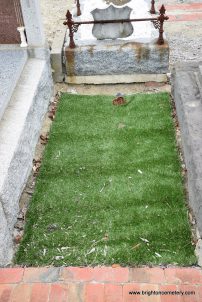 On 10 January 2006, tragedy struck in Egypt when the first rain of the season caused havoc on the roads. Local reports said that as many as 150 people were injured in collisions on the night, with one of the worst involving a group of Australians that claimed the lives of six with a further 27 injured. The horrific accident occurred on a stretch of the Cairo-Alexandria highway late at night while returning on a day trip that reports suggest began in the early hours of the morning. One of the six Australians killed was Dr Warwick Lorne Greville (1937-2006) who had been travelling in Egypt after attending a medical conference in Paris when the accident occurred near the end of the trip.

Greville graduated at the University of Melbourne (MB, BS, 1961) before moving to Chicago in the United States as a general practitioner. In 1983, he commenced practice in cosmetic medicine and surgery before moving back to Melbourne in 1991 the year he co-founded the Ashbury Medical Centre in Camberwell with Dr Ashley Granot. Five years later, together with wife Sheila who were married on 27 January 1962, they established the Ashbrooke Medical Institute at 627 Chapel Street, South Yarra specialising in liposuction/liposculpture, anti-ageing treatments and sclerotherapy – the removal of varicose veins without surgery. Colleagues and peers were saddened by the loss of the man they called the “godfather figure” of cosmetic surgery. Family friend Bill Anton recalled Dr. Greville’s “photographic memory…he could memorise complex pathways and the molecular structure of hormones or other biochemical substances. This is the sort of brilliant mind that has been wasted”.

His son Warwick Andrew Greville, 38 remembered his father as a great motivator, and a meticulous and diligent man saying “I’m proud of him and proud to be his son. It sounds strange but helping people was his hobby. Medicine was his hobby. He was a people person – he cared about everyone he met. You don’t see that every day”. After a service at Xavier College Chapel attended by 150 mourners, Greville was buried alongside his parents Lorne Alfred Warwick Greville (c1904-95) and Dorothy (c1906-92) on 25 January 2006 just two days before his 44th wedding anniversary.