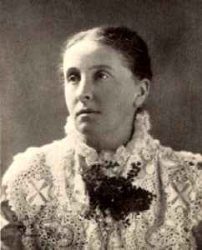 A native of Wiggenhall, St. Germans, Norfolk, England, Cambridge was born on 21 November 1844, the second child of Henry Cambridge, gentleman farmer (“constitutionally incapable of holding money”), and Thomasina née Emerson (“a splendid housewife”); she had a deep bond with her parents who nurtured “a strong and healthy self-esteem through unconditional approval”. Privately educated by a string of governesses who she bitterly resented, Cambridge began writing at an early age through correspondence with a well-educated Aunt (“the strictest of disciplinarians, feared and neither loved nor respected”) whose best advice was to “write what you understand”; Ada was to “generously acknowledge” her debt.

Attracted to the sisterhood at the age of 17 (“the lifestyle offered challenge in a world where little was available”), on 25 April 1870 she married George Frederick Cross (1844-1917) (“kind, good-natured and conscientious”), a curate designated for service in the Victorian colony (“he was singularly suited to the Australian ministry…young, strong, energetic, and impressed with faith”) and the newlyweds sailed on SS Hampshire arriving on 18 August 1870. After an invigorating stay in the city they headed for a new life in the bush (“dull and lifeless…like eating one’s first olive – we had not got the taste of it”) that was to take them to Wangaratta (1870-72), Yackandandah (1872-74) (“the loveliest setting of their eight Australian homes”), Ballan (1874-77) (“the move there ushered in a turning point in Ada’s life”), Coleraine (1877-83), Bendigo (1884-85), Beechworth (1885-94) and Williamstown (1894-1909) (“unfashionable, unenterprising, unbusinesslike…ideal for writing”).

Her book “Thirty Years in Australia” (1903) (“warm, intimate and lively”) was inspired by her busy life and many hardships which she endured as a bride in the remote bush of a distant land. Known for her “fluent and unpretentious work”, critics praised her “power of making a very ordinary and by no means improbable story highly interesting”; her writings explored controversial subjects of the day such as unhappy marriages, bigamy, divorce, and euthanasia. Of her twenty-five novels, her most successful works include “A Marked Man” (1890), “The Three Miss Kings” (1891), “Not All in Vain” (1892) (“rich in many ways – in characterization, in plot, and in social detail”), “Materfamilias” (1891) (“one of Ada’s superior achievements”), “A Little Minx” (1893), “A Humble Experience” (1896) (“placid, pretty, entertaining”) and her childhood reminiscences “The Retrospect” (1912) (“full of gentle, whimsical memories”) which was inspired by a trip to England in 1908 a work which Cambridge was far from happy with the end result.

Writing on her death on 19 July 1926 aged 82 from heart failure at a private hospital at Seymour Road, Elsternwick. The Australasian noted;

“her dignity and charm of manner, and her graciousness towards young folk and their interests have endeared her to everyone who knew her”.

Known as “the doyenne of Australian writers” during the height of her popularity, by the 1940s she was largely forgotten and somewhat unfairly dismissed as “a frail clergyman’s wife writing (genteel) romantic fiction of dubious value”. Rather, Cambridge was a woman of great resourcefulness, zest and courage, independently minded who insisted people should think for themselves. A grandson, David Harries had a distinguished career in the Royal Australian Navy having commanded the Australian Fleet from 1956-58 just before his retirement in 1960 with the rank of rear-admiral.

(Image by permission of the National Library of Australia, nla.pic-an24862677)