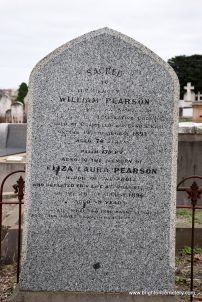 Alexander Pearson was born on 13 September 1869 at Kilmany Park Estate – Sale, Victoria the son of William Pearson (q.v.), pastoralist, politician and racing identity and Eliza née Travers. After his education at Geelong Grammar School (1883-87) as a boarder, he took up grazing on his father’s vast holdings continuing for many years in Gippsland and later in Berwick before retiring to Glen Avon – Pine Grove, Malvern in early 1920.

A member of the Victorian Racing Club, Pearson inherited his father’s love of the turf and was a well-known horse owner with a thoroughbred stud at Glenroy, notably Flagship (“a fine stayer. He had not a great deal of dash, but could plug along at a good pace for any distance”) which won the Williamstown Cup (1901), the SATC Handicap and the VRC Birthday Handicap and was unlucky to have lost the Adelaide Cup in 1902 finishing third. Other notable horses were Flat Iron (“a good steeplechaser”), Aqua Fortis winner of the Australia Waterloo Cup (1899) and Cantra which won the Aidful Strakes at Flemington and the Winter Handicap at Williamstown of which Pearson served as a committeeman, including a period as chairman.