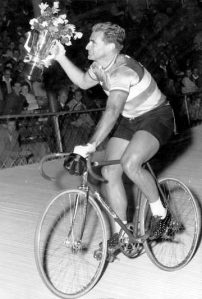 The 1950s was an era of unrivalled sporting achievement for Australia with champions such as Keith Miller, John Landy, Scobie Breasley, Ken Rosewall, Murray Rose and Dawn Fraser all becoming household names. But one person whose record stands out above all others is Sidney Philip Patterson (1927-99). In a cycling career that spanned from 1940 to 1968 in which he won everything from one-lap sprints to six-day events, the ‘Mighty Patto’ dominated the sport in Australia and on the world stage in such a way, that like Sir Donald Bradman, his record will never be eclipsed.

His four world championships – Amateur Sprint (1949), Amateur Pursuit (1950) and Professional Pursuit (1952-53) – reflects both Patterson’s endurance and versatility. In the words of Australian Sports Commission chairman Peter Bartels, it was “the equivalent in athletic terms of winning the 100 metres and the 1,500 metres…nobody’s ever done that again”. His athleticism was extraordinary; in 1949 at the Australian Track championships he won every event.

Before joining the professional ranks in 1951, an under prepared Patterson competed in the 1948 Olympic Games in London as a late selection and also in the 1950 British Empire (Commonwealth) Games winning silver medals in the 1,000m Sprint and Time Trial events. Patterson was tremendously popular. A lovable larrikin with a crushing handshake, he liked nothing more than a yarn and (quite) a few drinks with his mates. Not to mention the odd stoush with officialdom, such as the time in 1958 when he earned a 90-day suspension after throwing his bike and punching a referee at Melbourne’s Olympic Park. But otherwise, Patterson was held in awe and widely respected by all who knew him.

At the age of 72, he came up against a determined opponent stronger than anyone he faced in his career and after a hard fought race to the finish, lost a battle with cancer on 20 November 1999.