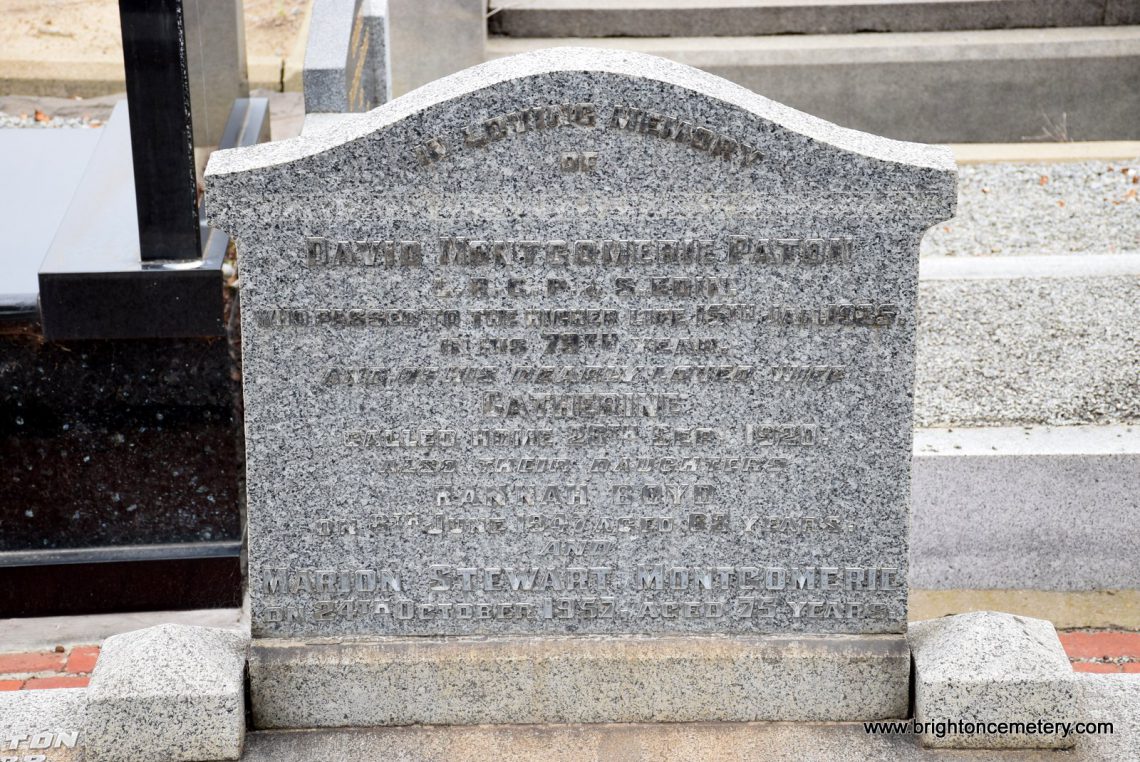 Extracts from The Medical Journal of Australia:;

“David Montgomerie Paton…was born at Hurlford, a village two miles from Kilmarnock, Ayrshire, Scotland, on April 11, 1856. His father, William Paton, was one of the last of the old Scottish parish schoolmasters who taught English, Greek, Latin, French, higher mathematics et cetera for the princely sum of a few shillings a quarter. David Paton attended his father’s school till thirteen years of age, when his father died [of phthisis at the age of forty one]. A streak of laziness combined with ill-health (he was frequently allowed to escape the mathematical period for this reason, it being his strong subject) prevented him from doing all he might have done. From a high, but mistaken, sense of humour he was never given help of any kind in his studied by his father, but after his death his mother told him that he had said to her: ‘Many clever boys have passed through my hands, but our boy is the smartest of them all’. His mother had been left a widow with a very slender income and a family of nine children, of whom David was the eldest. Thus the whole course of his life was altered. As a child he acquired a nasal and bronchial catarrh after an attack of scarlet fever, which remained with him all through life and largely contributed to the shaping of his career. After leaving school he was apprenticed to the softgoods trade, and in 1874, was sent out to Australia for his health and given two years to live. He remained in business till 1885. In the meantime his three brothers, having graduated from the Glasgow University (one in medicine), he himself decided to take up medicine. In 1885 he sailed for Scotland with his wife and three children with this end in view. One can only admire the audacity of the project, as his financial resources were very limited, and he made no preparation for failure. All through his course he took a high place in the class lists, frequently taking first place, but, his health failing him very badly, he had to content himself with qualifying LRCP, LRCS (Edinburgh), LFPS (Glasgow), and was compelled to return to Australia in 1889. He started practice in South Melbourne in 1889, where he obtained an appointment for the Manchester Unity Independent Order of Oddfellows Lodge, which served as a foundation for general practice. In 1893 he bought Dr William Warren’s practice in Studley Park Road, Kew, where he practised for twelve years. His health again failing, he went to Great Britain for a twelve months’ trip. On his return in 1906 he settled in Malvern where he remained till 1926, when he retired from active practice. He was a born radical and ever found it difficult to confine himself to a beaten track. Thus, after reading an article on anti-diphtheritic serum in 1897 he made a clinical experiment of the oral use in the treatment of sepsis which was successful. This was followed by many other successes, and after years of patient investigation he found that it produced results which were contrary to all accepted ideas. He had a most original mind; his work was his hobby, and he was always looking for the explanation of every clinical fact or appearance. Regrettably the successful users of serum seldom acknowledge their debt to Dr Paton; he used to quote Sir William Macewen as saying to his students: ‘Gentlemen, if you discover anything new, make sure of it and then publish. You will be received with the bitterest contempt, but after many years someone abroad will test your work and find you were right. Finally your discovery will come back to Britain and be credited to someone else!”. Dr Paton personally was a most genial and brotherly man, with plenty of good Scottish humour to cushion the bumps of life. His round and rosy face, with its large forehead, usually had a smile to welcome patient or friend. Apart from his lifelong interest in the Presbyterian Church, in which he was an elder, the Young Men’s Christian Association and some kindred Christian activities, he spared no time for outside occupations or recreations. He is mourned by many to whom he did good, not only medically, but morally and spiritually”.