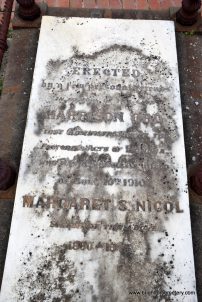 Harrison Ord was born on 15 August 1862 at Kensington, London the son of Harrison Ord, engine fitter and Susannah née Robinson. In 1877 the family migrated to Victoria and the following March having passed the civil service examination joined the Crown Lands department as a clerk (1878-86). In 1886 he transferred to the chief secretary’s office and was promoted senior inspector of factories (1890-93) until his appointment as chief inspector of factories, workrooms and shops (1893-1910) upon the passing of the Factories and Shops Act (amended) (1896), one of the most powerful and progressive Acts in Victoria’s history designed to prevent ‘sweating’ by the eradication of unduly low wages, long hours and poor working conditions.

Amended to introduce wage boards made up of both employer and employee representatives to determine minimum rates of pay, it wasn’t until the (Thomas) Bent (q.v.) ministry in 1905 ensured the Act became permanent in the stature books; Ord’s zeal, indomitable courage and disregard for red-tape led to his fair share of criticism in his “ardent desire to right the wrongs of the poor and helpless and downtrodden”. At the 1901 Victorian Factories and Shops royal commission that reported mixed results in the abolition of ‘sweating’, Ord told how employers would remark;

“’You cannot win a battle without killing a lot or men’…They felt it perfectly justifiable to kill employees by long hours and hard work in building up the employers’ industry”.

The Melbourne Punch writing of Ord in 1906 described him as “naturally nervous, often irritable, sometime provokingly petulant, but he is also courageous, conscientious and chivalrous…he is, and always has been, very human” but noted that “if he enjoys any sense of masterfulness it is brief, for he that lives the longest dies but young, for the Public Servant placed on such a pinnacle there is much abuse, little reward and less consolation”.

Residing at Nyallo – 46 Beaconsfield Parade, St. Kilda, Ord died on 10 July 1910 from a fractured skull as a result of an accident near the north-east corner of the Botanic Gardens when his horse slipped and fell while swerving to miss a post; amongst those who attended his funeral were the Premier John Murray (Warrnambool Cemetery), John Mackey (q.v.), the secretary of the 4,000 strong Victorian Employers’ Association (Herbert) Robert Walpole (Phillip Island Cemetery), and the chief architect of the Act, the liberal conservative Sir Alexander Peacock (Creswick Cemetery) who upon hearing of his death described Ord as “the best public servant the State had ever had, and no man had been more loyal and enthusiastic in his work”.