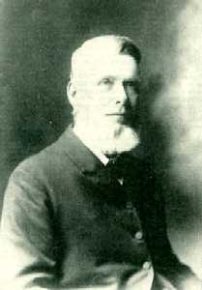 Charles Webb who went on to design some of the most widely recognised buildings of Melbourne was born at Sudbury, Suffolk, England on 26 November 1821 the son of William Webb, a builder and Elizabeth née Hayward; after his education at Sudbury Academy and apprenticeship with a London architect, he followed in the footsteps of his brother James (q.v.) and migrated to Port Phillip (Victoria) arriving 2 June 1849 on the Spartan; shortly after both brothers formed a successful architectural and surveying partnership (1849-54) their most important early commission being the design of the original St. Pauls’ Church, Swanston Street (1850) and Mac’s Hotel, Franklin Street (1853), but mostly houses in the Brighton locality including Chilton – 1 Wellington Street (1853).

In partnership with Thomas Taylor (1854-58), Webb designed the Gothic style Church of England Boys’ Grammar School, South Yarra (1856) noted for its “simplicity and lack of ostentation, dignity and functional suitability”; St. Andrew’s Church, Brighton (1856) and Christ Church, South Yarra (1856). Webb then practised on his own for the next thirty years (1858-88) when two sons – Charles and Alfred – joined him in the firm “C Webb & Sons” – 161 Collins Street. A contemporary of Lloyd Tayler (q.v.), the list of prominent buildings still standing alludes to Webb’s greatness as an architect and his belief to build “something permanently rather that will be used only temporarily”; he once wrote;

“to be a good and clever architect one must accumulate in the mind a great fund of material to work on. Study well what others have done, make their ideas your own, and they by study and application will generate or engender others”.