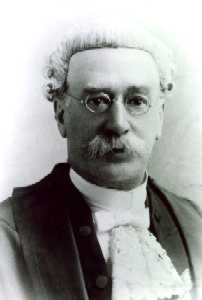 Born at St. Kilda, Melbourne on 14 April 1859 the son of Scottish-born Thomas Watson. After his education at Wesley College he entered the counting-house of “McNaughton, Love & Co” (Flinders Lane) before joining the Railway department (1875-82). In 1882 he was selected by the Speaker of the Legislative Assembly, Peter Lalor (Melbourne General Cemetery) to fill the position of assistant clerk of committees and accountant and later secretary to the Speaker (1882-88); he then rose rapidly through the service becoming sergeant-at-arms, secretary to the Railway Standing Committee (1890-92) under Thomas Bent (q.v.), second clerk assistant, clerk of private bills, and clerk of committees. By 1902 he was Clerk of Legislative Assembly (1902-10) before his final appointment as Clerk of Legislative Council and Clerk of Parliaments (1910-12). Described as “capable, earnest and zealous”, Watson published “The First Fifty Years of Responsible Government in Victoria” (1905) (“a book which has ever since been accepted as a standard work of reference”).

In 1888 he married Kathleen née Hall and they resided at Glendora – Nepean Highway, Elsternwick where he died on 5 December 1912 after suffering a breakdown some two years previously; The Age commented that;

“Mr Watson was a man of ceaseless energy and industry, and it was his devotion to his duties that undoubtedly shortened his life. He had exceptional ability as an administrator and organiser, and these qualities enabled him to bring the work of a large number of Parliamentary officials under his control to its present high state of efficiency”.

The Premier William Watt (1871-1946) paid tribute to Watson’s personal qualities saying that “he had shown unfailing courtesy and splendid energy and address. His genial and sincere nature and warm heart had won him a deep place in the affections of the House”, while the Governor Sir John Fuller (1864-1915) in a letter to the Premier said that;

“the terribly sudden death of Mr TG Watson has brought to an end the career of a singularly honourable and faithful servant, and leaves a gap in the official Parliamentary life of Victoria which it will not be easy to fill. Both Lady Fuller and I will be glad if you will convey to Mrs Watson and the members of her family our most sincere condolence, and at the same time our appreciation of the high character and sterling qualities of the friend that we have lost”.

In a rain-drenched burial service, so high was Watson held in esteem that both houses of Parliament adjoined for the first time in respect for an officer of Parliament.