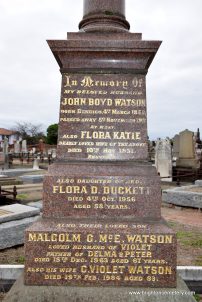 Born at Wattle Street, Bendigo on 4 March 1862 the eldest son of John Boyd Watson (1828-89) and Mary née Covell; his father was a well-known mining and property investor in Bendigo who left considerable wealth to his children. Watson junior followed in his father’s footsteps and achieved considerable wealth as a mine owner, and later as a land holder at Kyneton.

After a mining accident in one of his mines, in late 1889 he founded the “Watson Sustentation Fund”, a scheme to compensate injured miners in honour of his father, The Bendigonian reported;

“many miners in this city can testify to the inestimable benefit this fund has proved to the [Miner’s] Association…by the death of Mr. Watson the Bendigo miners loses a staunch friend”.

Described as a “purveyor of fine art and antiques”, Watson however is best remembered as the owner of Labassa – 2 Manor Grove, Caulfield between 1904 and 1920; designed in 1890 by John Koch (Boroondara Cemetery), by the mid-1920s the French Renaissance styled mansion had been subdivided into twelve self-contained flats. The National Trust of Australia (Victoria) took over the property in 1980, not long after being the scene of many wild parties by the bohemian set of the 1960s and ’70s. Watson died on 5 November 1911.