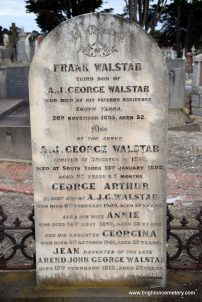 Born in Tottenham, London on 31 December 1834, the son of AJ Walstab (q.v.) and Georgina née Steele; the family migrated to Victoria in 1852 and shortly after Walstab joined the Mounted Police. This led to service in India where he sustained a leg injury that would hinder his movement for life and by 1860 he had turned to journalism becoming editor of the Calcutta Englishman; he also wrote his first novel “Looking back, or, pique, repique and capot” (1864) that was critically received.

By 1865 Walstab was back in Melbourne and went on to work briefly with The Age before a long association with The Herald (1865, 1882-1909) which he co-owned with others in 1889 after the death of John Halfey (Boroondara Cemetery). As a writer, Walstab penned many novels and short stories including “Looking Back”, “The Bushranger”, “Double Harness” and legend has it chapters for “Long Odds” (1868) the first novel by Marcus Clarke (Melbourne General Cemetery) a close friend and co-founder of the bohemian Yorick Club; Walstab was with Clarke when he died in 1881.

However, by 1870 Walstab was bankrupt and after a brief period in Castlemaine, Victoria where he edited the Castlemaine Representative and Chronile, he landed a job under James Casey (q.v.) in the Department of Lands and Survey (1873-80) and by 1880 was said to have been the highest-paid clerk in the department with £400 per annum. A contemporary of Adam Lindsay Gordon (q.v.), Walstab was first editor of Australian Journal founded by Alfred Massina (Boroondara Cemetery) in September 1865 – it was Massina who refused Gordon a loan on the day Gordon committed suicide in 1870.

He resided at Clarinda Street, Elsternwick and died on 8 February 1909 from chronic ulceration of the legs.