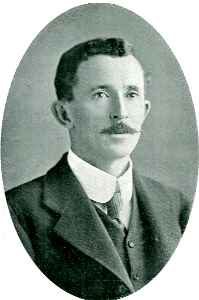 Born at Sherwood, Queensland on 24 March 1872 the son of John Walker, school teacher and first headmaster of Kalkie State School, Bundaberg who had migrated from Scotland in 1862 and Janet née Wilson. Henry was educated at Bundaberg state School and Brisbane Grammar School before studying at Melbourne University (MA, 1892) with first class honours in Logic and Philosophy.

Soon after graduating he was appointed junior master at “Wadhurst” – Church of England Boys’ Grammar (1895) followed by a number of years at “Cumloden” – Geelong College (1896-1900) before returning to the Senior School staff (1901-18); from senior master in chemistry to headmaster of the Lower School (1911-18), Walker was in the first flight of teachers. Described as one who “could inspire the brilliant, encourage the dull, reform the lazy, and teach the average as very few men can”, in July 1918 he was appointed second headmaster of Grimwade House Preparatory School (1918-24). As a headmaster he selflessly devoted his time to the students, even to the smallest boys “he was always approachable, always unaffected, and always transparently straight-forward…every boy felt that he had in him a friend as well as a headmaster”.

Walker’s life was tragically cut short on 15 January 1925, aged 52 when he and two others were hit by an unlicensed driver in a Buick vehicle at the corner of Swanston and Flinders Streets while returning from Queenscliff; before Chief Justice (Sir) William Irvine (1858-1943) with Hugh Macindoe (q.v.) prosecuting, Rachel May Foster aged 33 was found guilty of manslaughter and fined £250 and given a suspended sentence for life. The Prime Minister Stanley Bruce (1883-1967), a former old boy of the school, attended Walker’s funeral. He was survived by his wife Henrietta (d 1964); the year before his death he published “Matt, jeune australien” (1924).