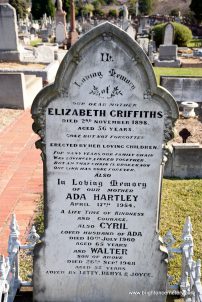 My grandmother, Mrs Ada Hartley née Rice, was buried at Brighton in 1954, a few years before I was born. She was born illegitimate in 1891 and adopted by the Griffiths family of Brighton in 1893. Mrs Elizabeth Griffiths died in 1898, and is buried at Brighton. She had a fine headstone. In due course, her husband Mr James Griffiths joined her, but that fact was never shown on the headstone. Many years later, their foster-daughter Ada joined them.

My mother, her brother, and two sisters, were part of an era when cemetery visits were routine. Every month they, and my cousins and I (I was the youngest of our generation) would visit Brighton. Visits were usually on a Sunday, but during school holidays, we sometimes went on weekdays.

Running and excess noise, from any cause, were strictly forbidden. My cousins and I would walk as briskly as we knew how from the Hawthorn Road entrance to the Griffiths grave which was a fair distance. First to arrive was some sort of winner: I was disadvantaged by my shorter legs. But the tricks of this race were, alternatively, either remembering the most direct route without unnecessary deviation, or discovering a better path. Parents were left in our wake as they took a longer journey, avoiding our zig-zags. The great disgrace was, of course, to get lost. One cousin completely overshot the mark one day. No one dared to raise a voice in the cemetery, so the search was conducted in silence, and as a result, he was not found for what seemed a long time. Due reverence did not permit his punishment to be administered within the cemetery, so he had a long walk back to the gate, knowing what must, and did, befall him as soon as he stepped onto the footpath outside.

On more mundane occasions, when the oldies caught up, they would attend to maintenance, fresh flowers, etc. The children would explore nearby.

There was a very impressive, polished black headstone near Grandma: I can’t recall the name, but the gent concerned died on the day I was born. I never worked out the significance of this, but every visit I would stand reverently at the foot of that grave for a few moments.

Another nearby grave had a concrete top. The soil beneath had subsided, and the lid had broken and fallen in; very spooky. My cousins and I would stare into this void, silently, until our fears forced us to withdraw. The last to yield was some sort of winner. That was never me.

The children would be summoned to fill the vase, take old flowers to the bin, and any other chores. Being selected for such a task was reward for quiet, dignified behaviour, rather than for winning any of the events we made up for ourselves. Parents would drink their thermoses and chat about times and people long gone: stories of catching yabbies in Albert Park Lake and snapper of St. Kilda jetty were told and retold.

There was no point hurrying to leave, so we would dawdle, so it seemed, with our parents, down the main access path. On this journey, to exercise our minds, and build our characters, we would recite from memory the epitaph of Adam Lindsay Gordon’s magnificent headstone. The challenge was to see who could remember the most, without error, of course. When the group arrived at the grave of “The Poet Gordon”, we’d stand and recite it together, by way of practice. Eventually, we children could all remember the eight lines:

“Question not, but live and labour
Till yon goal be won,
Helping every feeble neighbour,
Seeking help from none.
Life is mostly froth and bubble,
Two things stand like stone-
Kindness in another’s trouble,
Courage in your own”.

My brothers are 17 and 15 years older than I. Both had left home before I could remember. But they had been through the same routine as I have described. A few years ago, nostalgically comparing our widely separated childhoods, we discovered that they and I could each recall the eight lines above.

I left Melbourne in 1978. I have returned only occasionally. If I’m in the area, I drop in at Brighton Cemetery. I am surprised each time that I can remember my preferred zig-zag path to the family grave. The last time I was there was 1996, the other graves mentioned were still as I recalled them. It’s comforting to find a rock of stability in an ocean of change.