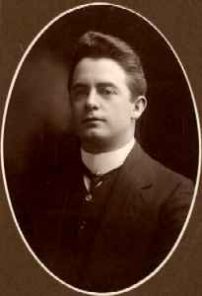 Born on 10 August 1878 at Warrnambool, Victoria the son of Irish-born Joseph Russell, baker and Mary née Conway; his education was at the Newport State School and St. Mary’s Catholic School, Williamstown. A delegate for the Printers’ Union on the Melbourne Trades Hall Council, Russell was blessed with an oratory tongue that belied his years and a handsome ‘baby-face’ appearance. Elected to the Senate (1906-25), he went on to serve on the cabinets of the Fisher and Hughes ministries as assistant minister (1914-16), honorary minister (1917-18) and acting minister for defence (1919).

In 1911 Melbourne Punch wrote of Russell in the popular “People we Know” series that having;

“literally and truly talked himself into Parliament [he was] now a man to be reckoned with – a wily political antagonist who, under an air of never-failing bonhomie, conceals a cool, shrewd, wise head, and a wonderful knack for doing the unexpected thing at the right moment. He knows the game, and he plays it for all he is worth. But, unlike some members, he plays it fairly and truly all the time”.

Of the Senate, Punch noted that it “is the House in which a seat is gained chiefly by energy, and muscle, and pluck – all the virtues of young men”.

He was a personal friend of Prime Minister William Hughes (Northern Suburbs Cemetery), and was the only Victorian member to follow Hughes to form the Nationalist Government in February 1917 – a split from Labour caused by the divisive conscription referendum of the Great War; in spite of opposing conscription, Russell contended that the State executive had no right to compel his resignation. Punch sided with Russell;

“In politics it is a dangerous thing to change one’s part. It leaves the one who changes open to all sorts of charges if insincerity…But when Russell became a Nationalist he didn’t change his views, the Labour Party did…’Ted’ is still a Labour man – that is, a Labour man of the old order”.

Increasingly tried beyond his capacities his health began to fail after 1921 and he died while still a senator at the Sunbury Hospital for the Insane on 18 July 1925; survived by his wife Margaret née Evans (d 1989) whom he married on 30 April 1907.

(Image by permission of the National Library of Australia, nla.pic-an23366941)