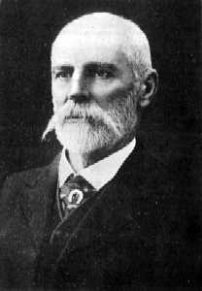 Sadleir was born on 11 June 1833 at Brookville House, near Tipperary Town, Ireland the son of James Sadleir and Eliza née Clarke; he migrated to Australia with his brother Nicholas who later became a well known pastoralist in New South Wales and Tasmania, sailing on the Great Britain on 22 August 1852. After a difficult three month voyage they arrived in Melbourne (“the dust and the general discomfort rather shocked us”) and on the urgings of an old friend from Ireland, Captain Jared Fox (“stern and strict during hours of duty; off duty he was altogether friendly and considerate”) he joined a special corps of police cadets formed by Governor La Trobe on 1 December 1852 to address the pressing need for law and order in the country due to the loss of efficient officers who had joined the rush to be rich.

His first posting was at Ballarat (Jan 1853-May 1854) where the first signs of discontent amongst the miners leading up to the Eureka uprising were played out; Sadleir lamented the position of the police between a “stubborn and unwise central Government” and a “righteously dissatisfied community” but described the diggers behind the December 1854 revolt as “a few score undrilled and ill-equipped men…silly sheep”. Transferred to Melbourne (1854-56), Sadleir came under the command of Superintendent Samuel Freeman (Melbourne General Cemetery) who instilled in the young junior sub-inspector “the first principles of the obligations of duty”; in later years, Sadleir described Freeman as “the most competent officer the service had ever had” and acknowledged his “fatherly consideration and kindness”.

On Freeman’s recommendation, Sadleir was transferred to Beechworth (1856-59) “in order to get the foot police into shape” and formed a friendship with Robert O’Hara Burke (Melbourne General Cemetery) who later headed the ill-fated 1860 expedition to cross the continent. Sadleir noted Burke’s “many eccentric ways who utterly disregarded fashion…his well-knit frame, brave heart, and chivalrous spirit” but doubted his abilities as a leader having “no knowledge whatever of the resources by which an experienced bushman might find a living in an Australian desert…and was continually losing his way in his short trips about Beechworth”. From Hamilton (1859-64) he was posted again to Melbourne (1864-67) at the Russell Street branch supervising the police on the beat (“the crux of the whole business”) but was dissatisfied with his superiors and welcomed his posting to East Gippsland (1867-71) (“joyous news…compared with smoky and disease-haunted Melbourne”) coming into contact with William Pearson (q.v.) who may have influenced Sadleir’s investment in the fabulous rich Long Tunnel mine at Walhalla.

In 1874 he was promoted to superintendent and posted to the Upper Goulburn district (1874-83) (“considered one of the undesirable commands”) that found him as one of the principal players in the capture of the Kelly gang (1878-80). From the initial warrant for the arrest of the Kelly brothers after the alleged assault of Constable Alexander Fitzpatrick (Box Hill Cemetery) to the final climax at Glenrowan, Sadleir played a prominent role in a pursuit that was described as dogged by “inefficiency, inappropriate policies, stubbornly held convictions, clumsy tactics and racism”; he believed that the whole sorry saga could have been avoided “by a better administration of police officers in the north-eastern district” and was critical of action by his superiors in using the Outlawry Act to arrest Kelly-sympathisers believing that it only inflamed hostilities towards the police.

At the Glenrowan siege on 28 June 1880, Sadleir took command at 5:30am after Superintendent Francis Hare (Melbourne General Cemetery) (“full of enterprise and dash, clever and self-confident”) was wounded in the opening salvo; he refused to risk the lives of the men in a general attack on the hotel fearing for the safety of the large number of spectators, reporters, locals and Kelly sympathisers who had gathered instead telegraphing Melbourne for a cannon in a widely lampooned decision. When a grievously wounded Ned Kelly was finally under police capture, Sadleir showed great kindness towards the outlaw when death seemed inevitable (“You shall have every care and attention, Ned. Do not irritate yourself; keep yourself quiet”) later commenting that “it was hard to think that he was a callous and cruel murderer”.

At the (Francis) Longmore (St. Kilda Cemetery) Royal Commission Police Inquiry (1881-83) Sadleir was found to have made “several errors of judgement, his conduct of operations was not judicious or calculated” and recommended that he be “placed at the bottom of the list of superintendents and reduced in rank” but not before the Kelly Reward Board granted him the sixth largest share of the £8,000 reward for his part in the affair (£240-17-3); Sadleir was highly critical of Longmore (“eminently honest and conscientious, but he went relentlessly for scalps”) and lamented the tendency of the Commission to accept hearsay as fact without the right of reply and to encourage the personal opinion of witnesses. The Argus newspaper of March 1882 noted that;

“Superintendent SADLEIR returns to his old position. The commissioners desired to put him back a step because of his conduct of affairs at Glenrowan. The statements made in the sketch about Glenrowan have been shown to be untrustworthy, and the sneers indulged in are unworthy of public men and of a state document. Mr. SADLEIR is to be congratulated upon a recall which clears his character. The Government censure him for his minute upon Senior-constable KELLY, who objected to be stationed at Greta. If the minute contained a reflection upon the courage of the constable, no doubt it was ill deserved. But superintendents have to maintain discipline, and it seems to us that it would have been sufficient to have expunged the memo, without censuring Mr. SADLEIR for an act performed in the bona fide discharge of his duty. This, however, is a small matter compared with the larger issues that had to be dealt with”.

Before retiring on a pension on 31 December 1896, his final posting was in charge of the Metropolitan District (“the most important post in the service after that of Chief Commissioner”) and showed an ingenious mind to solve difficult problems.