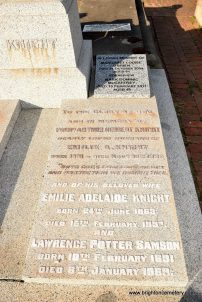 Frederick Knight who was a stockbroker, pastoralist and foundation president of the “Taxpayers’ Association of Victoria” was born at St. Kilda, Melbourne on 13 June 1861 the son of John Knight an architect. After his education at Wesley College, Prahran he entered commercial life in Melbourne before accepting a position on South Comongin Station, near Charleville, Queensland as a bookkeeper in 1883 and three years later became overseer; he later returned as manager (1895-1914) purchasing an interest in the station (1909) and became sole proprietor (1910-14). The Age noted that “he engaged extensively in the breeding of pure bred sheep and cattle, and established the famous Shorthorn stud herd, the ‘FFS’ brand” which became known all over Australia.

In 1888 Knight returned to Melbourne and bought a seat on the Melbourne Stock Exchange (1888-95, 1914-32) which he held until his death. A generous philanthropist (he gave £5,000 to Melbourne University) and director of numerous institutions including “Metropolitan Gas Company”, “British Dominion Films”, “Berry Street Founding Home”, “Victorian Seamen’s Mission” and a member of the Wesley College council, Knight was best remembered as the founder and president until his death of the “Taxpayers’ Association”, established soon after World War I “with the object of safeguarding the interests of taxpayers and of endeavouring to check public extravagance”.