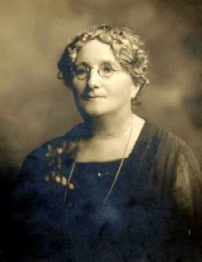 Marion Miller was born at Woods Point, Victoria on 8 August 1865 to Irish immigrants. Educated privately, she spent many years as a relief teacher throughout Victoria before her marriage to Joseph Knowles a Melbourne city valuator on 19 September 1901; they later separated and she raised their two children.

Encouraged by the editor of The Australasian David Watterston (Boroondara Cemetery), she found great solace in writing as a creative outlet during her time when her teaching isolated her from family and friends and she soon began to contribute poems and sketches on nature, children, love, death and country life as ‘John Desmond’. Her mainstream works celebrated Catholicity but were little received by the reading public and included the novels “Barbara Halliday” (1896), “Corinne of Corrall’s Bluff” (1912), “The little doctor” (1919), “The house of the garden of roses” (1923) and “Meg of Minadong” (1926). She also published a collection of tales in “Shamrock and wattle bloom” (1900), as well as two volumes of verse with “Songs from the hills” (1898) and “Fronds from the Blacks’ Spur” (1911).

In September 1899, Knowles began writing a women’s column with the Catholic weekly Advocate (1899-1927) founded by Samuel Winter (1843-1904) and later a children’s section under ‘Aunt Patsy’; on her retirement in 1927, the paper was instrumental in raising funds for the purchase of a house in Kew. In addition to her writings, she played a leading part in the organisation of the Catholic laity as foundation president of the Catholic Women’s Club (1913) and also through the formation of the social club for single Catholics. She was also honorary secretary of the committee for St. Joseph’s Home for Destitute Children in Surrey Hills.

(Image reproduced by permission of the National Library of Australia, nla.pic-an24041715)