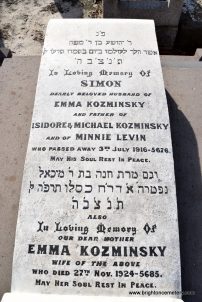 The man behind “Kozminsky’s Antiques”, 421 Bourke Street (corner McKillop Street), until the 2017, the oldest of its kind in Victoria, Kozminsky was born in Prussia (Germany), the son of Moses Kozminsky and was believed to have migrated to Melbourne from London in 1856 on board the Black Swan. He spent a number of years in Western Australia (“where he was well-known to all the old pastoralist families and residents”) and Mortlake in country Victoria before opening as an antiquarian jeweller in Elizabeth Street (corner of Bourke Street) in 1864; some sources note 1851 as the date the firm was established when Kozminsky would have been just eighteen years old.

Residing at 43 Robe Street, St. Kilda, he died from senile decay on 2 July 1916 aged 83; after his death the company was ran by his wife Emma née Solomon (d 1924) whom he married in 1869 where it thrived until sold by Kosminsky’s brother Isadore during the Great Depression. It was later purchased in the late 1960s by Kurt Albrecht (1926-97), who went on to become a skilful and respected jeweller; the firm was sold by his four children in 2003 for only the third time in its history. In 2017 after 166 years, Kozminsky ceased to operate before re-opening by Kurt’s daughter Kirsten a year later at 349 Collins Street.