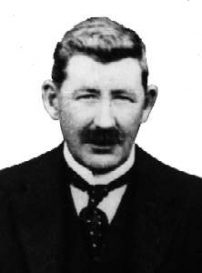 Hagelthorn who was born at Sebastopol near Ballarat, Victoria on 23 January 1864 to a Swedish seaman was educated at the local state school and later Creswick Grammar where he matriculated in 1880; (Sir) Alexander Peacock (Creswick Cemetery) who was to be his premier many years later was a pupil-teacher. Before he entered state politics, Hagelthorn worked variously as a wharf lumber, grocery assistant in Stawell, general store owner in Portland and as a successful stock and station agent in Horsham as “Hagelthorn & Bolton” (1904-19); by the age of forty he was wealthy and well respected throughout the Wimmera and Mallee districts. The Melbourne Punch made the most of his Mallee background;

“Hagelthorn has had all the typical Mallee experience – stiff work, failure, success, monotony, heat, rain…his appearance is the Mallee brand, and in his disposition is the Mallee perseverance. As a speaker he is matter-of-fact, and has the Mallee man’s weakness in wit”.

Representing the Legislative Council seat of North-Western Province (1907-19) as a Liberal, it did not take long for Hagelthorn to show his mettle and he served in various successive portfolios from 1909 to 1917: Minister without portfolio and Immigration (1909-13); Public Health (1913); Public Works (1913-15); and Agriculture (1915-17). Described as a man of “soundness, ability and penetrating common sense”, he was above all a man of great persuasive influence; in 1915 while Minister of Agriculture, Hagelthorn persuaded the Prime Minister William Hughes (Northern Suburbs Cemetery) to establish the Australian Wheat Harvesting Scheme to enable the marketing, shipping and sale of the nation’s wheat supply during the war which prospered under his control. Melbourne Punch noted that Hagelthorn;

“was the right man to take hold of the problem. No ordinary politician dared have done this…the ‘Minister of Wheat’ is not a politician at all in the sense it is understood here. He does not care whether he offends individuals by his scheme…he just goes straight ahead and makes good”.

The following year, along with Peacock and a number of professors from the University of Melbourne including Sir Thomas Lyle (1860-1944), he was instrumental in the formation of the Commonwealth Advisory Council of Science and Industry later to become the CSIRO.