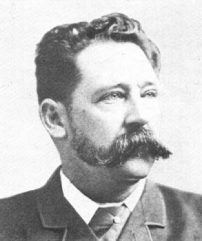 The son of Michael Guilfoyle a landscape gardener and nurseryman and Charlotte née Delafosse, William has born on 8 December 1840 at Chelsea England; the family migrated to Sydney in 1853. Educated privately by a maternal uncle and at Lyndhurst College, Glebe he received botanical instruction from Rev William Woolls (St. John’s Cemetery), William MacLeay (1792-1865) and John MacGillivray (1821-67) who all encouraged Guilfoyle to follow his father’s interest; his earliest appointment was on the scientific staff of HMS Challenger in 1868 that travelled through the Pacific Ocean.

That same year, the voices of criticism from influential Melburnians were growing louder against Baron Ferdinand von Mueller’s (St. Kilda Cemetery) scientific and educational approach as director of Botanical Gardens in Melbourne. A board of inquiry was later appointed only to find their recommendations disregarded by the Commissioner of Crown Lands, James Casey (q.v) who hand-picked Guilfoyle on 21 July 1873; the two had met while Guilfoyle was growing tobacco and sugar cane at Tweed River Valley. Where von Mueller’s approach was scientific, Guilfoyle’s was recreational who based his designs on the classic English landscape tradition.

Acknowledged as the “architect of the gardens”, Guilfoyle went on to transform a vulgar wilderness into a picturesque recreation ground of expansive lawns, stunning views, broad sweeping walks and cleverly designed pathways, curving garden beds, refined pavilions and rustic bridges into a one of the finest gardens unrivalled in the southern hemisphere; after the separation of the swamp and lagoon from the Yarra river under the direction of Charles Catani (q.v.), Guilfoyle was able to create the chain of ornamental lakes further adding to the beauty of the gardens. He also undertook private landscape design work amongst the many were Nellie Melba’s (Lilydale Cemetery) Coombe Cottage at Coldstream; Moritz Michaelis’s (St. Kilda Cemetery) Linden in Acland Street, St. Kilda; and Werribee Park for the Chirnside brothers.

Retiring in 1909, he lived at Chatsworth – Jolimont Road, Jolimont and died on 25 June 1912 survived by his wife Alice née Darling whom he married in 1888 and their only child William James (q.v.).