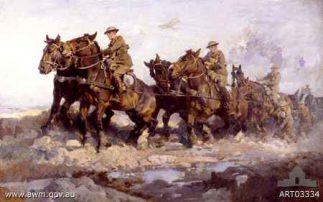 Without doubt Australia’s finest equine painter, Power was born on 31 December 1877 at Dunedin, New Zealand the son of Peter Power and Jane née Amers; he received little formal education and was practically self-taught as an artist.

His first commission was for the Art Gallery of South Australia for “After the day’s toil” (1903). Shortly after he studied at the Académie Julian, Paris for two years (1905-07) where he gained his love of painting animals, especially horses. In June 1913 he had his first one-man exhibition at the Guild Hall, Melbourne that was described by The Age as “the most refreshing and inspiring collection we have had in this city for many years”. Two years later, the Australian government invited Power and fellow artist George Lambert (Waverley Cemetery) as official war artists; Power’s unique individualist style made him eminently suited to the role. The artist Max Middleton described the style as;

“It was based on three points. First, his diligent study of human and animal anatomy and his keen eye for the tones and colours of nature. Secondly, his ability to combine human and animal figures with the landscape and create striking compositions. And, perhaps, the most important of all, his talent for creating a feeling of movement and drama”.

But nor was Power merely a war artist. His versatility can be seen in other works, notably “Farm, Somerset” (1928), “Gypsy Camp” (1930), “Zinnias” (c1940), “The Musician”(1944) and “The Aviary” (1948) full of bright and bold colour of birds, parrots and flowers. With the opening of the new Parliament building in Canberra, Power was commissioned to depict the event, and the painting “Opening of Federal Parliament, Canberra, 9 May 1927” can be seen hanging at Parliament House. It was this decade during the height of his fame that his works were commanding some of the highest prices by any Australian artist.

Residing at 54 Crisp Street, Hampton, Power died on 8 December 1951 survived by his second wife Marjorie neé Desmazures whom he married on 5 September 1936. Critics accorded lavish praise, among them the former director of the National Gallery of Victoria, John McDonald who said “he was outstanding as a painter of action, and had no rival in his field in Australia”.