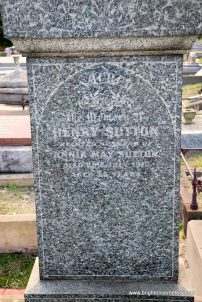 Born on 3 September 1856 at Ballarat, Victoria, the second born of six children to Richard (1830-76) and his wife Mary née Johnson; in 1854 his father founded the well-known music business “Suttons Pty Ltd” in a tent on the Ballarat goldfields which was still going strong over a century later with stores in two states. Unlike his siblings, Henry had little to do with the family business during his formative years instead forged a remarkable career as an inventor of extraordinary ability well ahead of his time. Shy and modest and with no formal education, he became interested in science and engineering and by the age of ten his observations of insect flight led to the invention of a wind-up flying machine he called an “ornithopter” and is credited with being the first person in Australia to have experimented with flight.

By the age of fourteen he had invented an electric continuous current dynamo which was later used by Zénobe Gramme of Belgium to become the standard after 1871 leading to the rapid development of the electric motor industry throughout the world. Less then a year after the American Alexander Bell had invented the telephone, Sutton had already designed and constructed a further twenty different models as well as a complete telephone network system at the family’s music warehouse (1877) leading Bell to visit Australia to see how it had been achieved.

Sutton was also involved in experiments with light, including a mercury vacuum pump (used to develop light bulbs) and the incandescent globe independent of Thomas Edison’s discoveries. Other inventions include the world’s first portable radio able to transmit five hundred yards; a portable electric storage battery; but probably his greatest invention was his design of a telegraphic form of television he called the ‘telephane’. Sutton took out very few patents for his remarkable designs, preferring to “benefit fellow workers in science” thus partly explaining his lack of international recognition.

A keen and enthusiastic motorist, in December 1903 it was Sutton who moved the motion that led to the formation of the (Royal) Automobile Club of Victoria. After 1894, he concentrated on the family business with his brothers Alfred, Walter and Frederick (q.v.). Residing at 9 Erskine Street, Malvern he died from chronic nephritis on 28 July 1912.