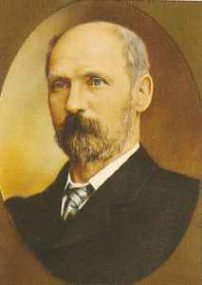 James Hardie, who was born at Linlithgow, Scotland on 27 July 1851 the second son of Alexander Hardie, a currier and leather merchant and Margaret née Duncan is the eponym of the firm of the same name. Arriving in Melbourne on board the Oroya on 14 August 1887, Hardie quickly set up business five months later buying and selling consumable items for the tanners’ and curriers’ trades in Flinders Lane; the depression of the 1890s had little effect on the company’s fortunes and on 1 January 1896 he formed a partnership with fellow Scot Andrew Reid (1867-1939) (“one of those very much alive and up-to-date businessmen who are always on the go”) trading as “James Hardie & Co” at 581-83 Little Collins Street.

Where Hardie was dour, retiring and nervous, Reid possessed charm and vigour and the partnership succeeded (“the two men were a good combination”). After an extended illness in 1903, Hardie travelled overseas and while on this trip, arranged to sell a new type of roofing and lining slate product called “fibro-ciment” made by the “Fibro-Ciment Company” of Poissy, France; compony folklore has it that a package of samples was gathering dust in the office of the company’s London agents who opportunistically sold it to Hardie for £100. Initially, the product proved a loss making venture due to breakages but by the Great War, fibro-cement became the firm’s core business; advertisements noted with a somewhat marketer’s stretch of imagination that the material is “thoroughly fireproof, cool in summer, and comfortable in winter”. Import restrictions due to the war forced the company to manufacture the product in Australasia and a plant at Camellia on the Parramatta River, New South Wales opened in May 1917 with other plants following at Riverdale, Perth (1921), Brooklyn, Melbourne (1927), Newstead, Brisbane (1934) and Penrose, Auckland (1938).

With the state of the company finances playing heavily on Hardie during the first decade of the 1900s (“the overdraft [£2,800] coming due and current accounts coming due caused me to worry and made night hideous for want of sleep”) he retired from the business in 1912 and the partnership dissolved retrospectively from 30 June 1911; Reid would pay his former partner over £17,000 for his share in the company he founded. He retired to his home at Bolton Avenue, Brighton Beach before later moving to Lithca– corner Burke Road and Beaver Street, East Malvern devoting the rest of his life to community work and family.

Married to Clara née Buncle (d 1948) on 11 January 1893, Hardie died on 20 November 1920 from arteriosclerosis and heart failure whilst visiting his son Alexander (d 1924) at North Poowong, Victoria. None of the three surviving Hardie children had offspring and the company was left to prosper into a great Australian multi-national firm as “James Hardie Industries Limited” under the guidance of Andrew Reid, his sons Thyne Reid and Sir John (Jock) and grandson John Boyd Reid who retired in 1996 after 23 years as Chairman. Floated on the stock exchange in 1951, half a century later the firm established a parent company in the Netherlands before transferring to Ireland in June 2010.