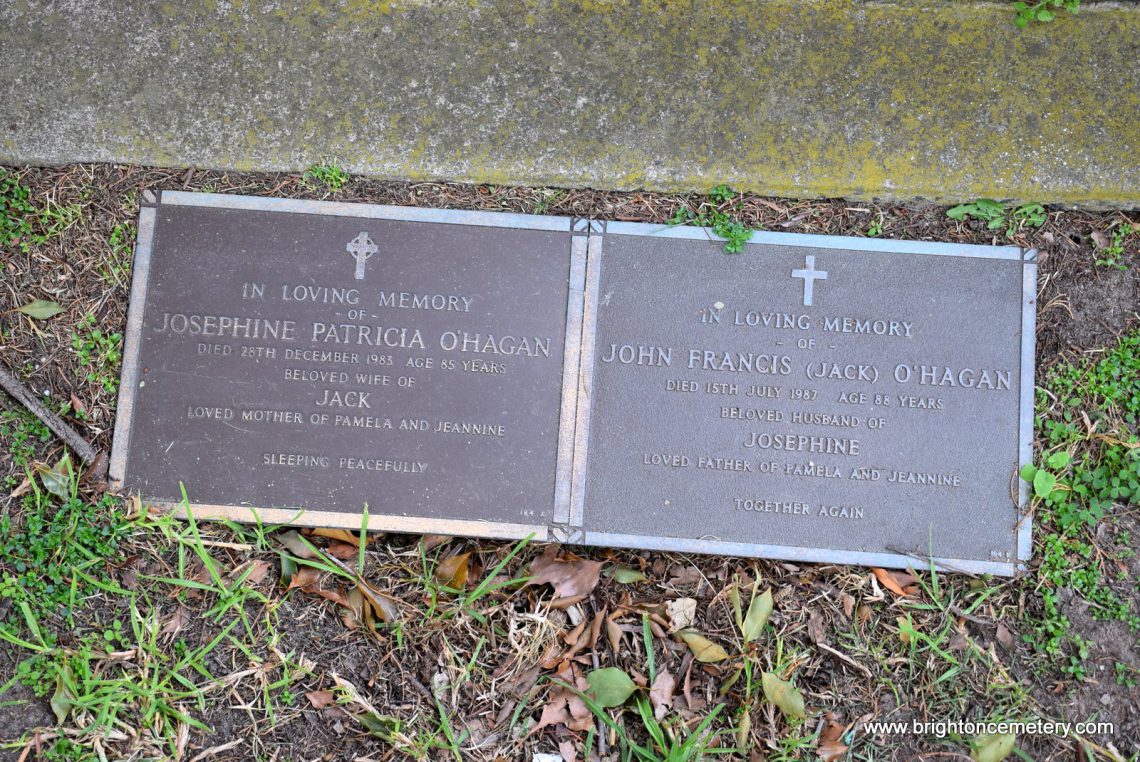 Jack O’Hagan who went on to become Australia’s most prolific song-writer for over four decades was born in 1898 at Fitzroy, the son of Pat O’Hagan, a hotelkeeper and Alice née Quinlan. Educated at St. Patrick’s and later Xavier College, O’Hagan began his musical career as a song plugger at “Allan’s Music Store” in Melbourne where he played sheet music on the piano to customers.

One day, a fine English operatic star noticed a copy of “Along the Road to Gundagai” (1922) and asked for it to be performed then said “That song will make you famous!”

A distinctly sentimental Australian melody, the song was first performed by Leonard Hubbard in 1923 and recorded in London before selling some 40,000 to 50,000 copies in the first three months. But O’Hagan wasn’t what contemporaries would describe as a “one hit wonder”; during his career that spanned from 1916 to 1961 he wrote over 600 songs with more than 200 published many of which are still performed in distant countries. His songs were proudly Australian about Australian people and places, many of which featured famous identities: “Kingsford Smith (Aussie is proud of you)” (1928), “Our Don Bradman” (1930), and “Our Marjorie (Jackson)” (1952). Other classics include “Where the dog sits on the tuckerbox (five miles from Gundagai)” (1938) “Ginger Meggs” (1948), “Things is crook, in Tallarook” (1952), the war-time hits “When a boy from Alabama meets a girl from Gundagai” (1942) (“That one came out when the streets of Melbourne, Sydney and Brisbane were packed with American troops. It couldn’t miss”.) and “Little ships will sail again” (1943); and “Josie and me” (1929) dedicated to his wife Josephine née Weichard (d 1983), the daughter of a musician.

Recalling his most celebrated song in 1974, O’Hagan revealed;

“Back in those days, the early 20s, people weren’t interested in songs about Australia. So I called one of my songs ‘Down Carolina Way’ and took it to Hugh D McIntosh, the great entrepreneur of the day, very colourful he was – used terrible language. He looked at ‘Down Carolina Way’ and exploded. ‘Why don’t you write a blank, blank, blank Australian song?’ So I went away and wrote ‘Along the Road to Gundagai’.”

As guest of honour at Gundagai’s centenary celebrations in 1956 O’Hagan was to confess it was his first visit to the town. With the advent of television O’Hagan’s unashamedly nostalgic songs were considered outdated. A keen golfer and ardent supporter of St. Kilda Football club, O’Hagan was awarded the OBE in 1973.

O’Hagan died on 15 July 1987 aged 88 years old and was interred in the Brighton General Cemetery after a service at the local St. Finbar’s Catholic Church.