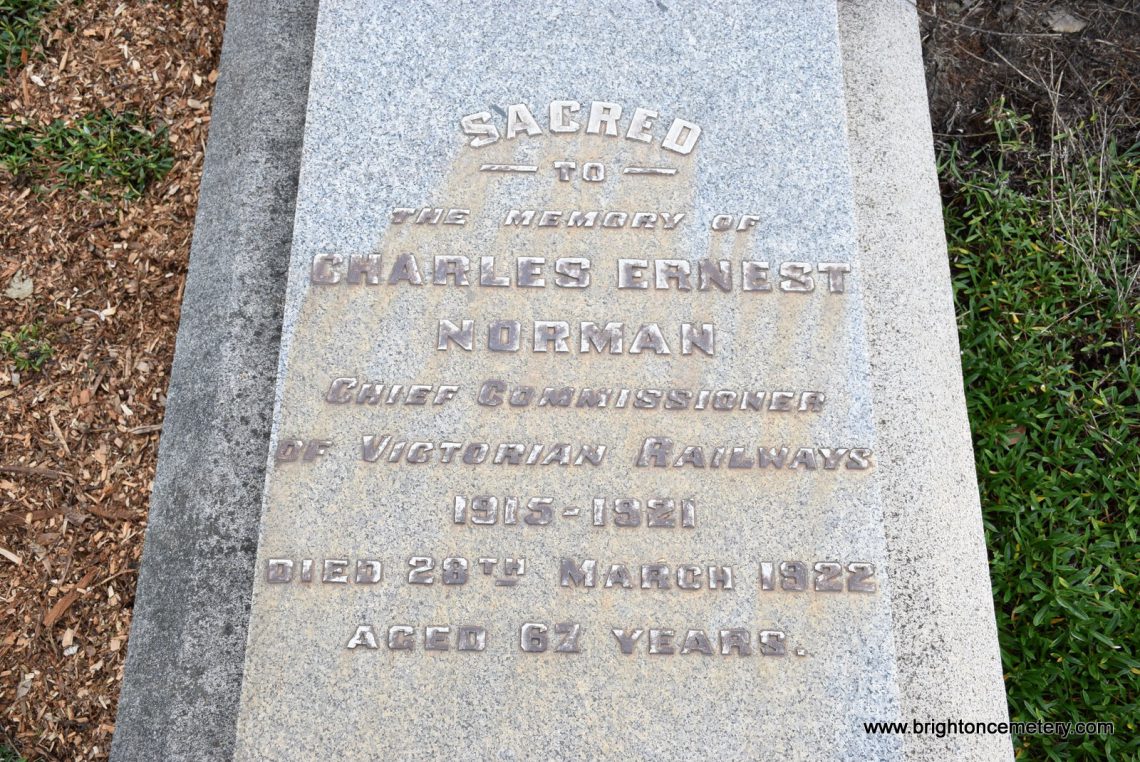 Born at Southampton, England on 31 December 1854 the third son of Captain William Norman (1812-69) commander of HMS Victoria who died whilst visiting England for the purpose of bringing out HMS Cerberus. Arriving in Victoria in May 1855, Charles was educated at Williamstown Grammar School and later Scotch College (1864); after his father’s death he was appointed in the railways as an engineering pupil on 21 February 1870 under Thomas Higinbotham (St. Andrew’s Churchyard) then engineer-in-chief.

Working his way up through the ranks of the engineering department during a time of rapid development of the railway network, Norman became chief engineer of existing lines (1893-1909) and was closely involved in the construction of Flinders Street Station (1905-10). In 1909 he was appointed a Railway Commissioner (1909-20) later serving as chairman (1915-20) succeeding WF Fitzpatrick in April 1915 where he oversaw the first stages of electrifying the suburban lines, notably the Sandringham-Essendon passenger line (May 1919) being the first in Australia; and had the difficult task of administering the department through the strain and stress of the war years in the face of rising costs and transportation troubles caused by maritime strikes. A member of the Victorian Institute of Civil Engineers, after his retirement in September 1920 he accepted the position of director of the “Silverton Tramway Co” succeeding Duncan McBryde (q.v.) on his death in November.

At the time of his death on 28 March 1922 aged 67, the president of the Australian Railways Union (Vic. Branch) not always inclined to single out praise was moved to pay tribute saying;

“he earned the deep respect of everyone in the service. While he was in office he always gave the men a fair deal. Though one of his characteristics was his bluntness we recognised him as honest and sincere, and his aim was always to reach finality in any outstanding matter as quickly as possible…his name will always be revered by the men of the railways service”.

“he was beloved by all who knew him. His record of fair dealing was one of which any man might be proud. He was a fine administrator, and a born leader of men, inspiring everyone by his example to do their utmost in public service”.

Residing at Tintern Avenue, Toorak, Norman was survived by his wife Emily daughter of Frederick Brown (Beechworth Cemetery) a prominent citizen, solicitor and politician of Beechworth whom he married on 18 January 1899; after their marriage they travelled overseas to England, Europe and America.