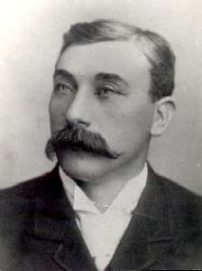 Born on 12 May 1854 possibly at Argyleshire, Scotland the son of Robert McBryde and Mary née Ashbridge. At the age of eighteen, he migrated to New South Wales and became the lessee of the Mount Poole pastoral station, then located 150 miles north of the rich silver-lead fields of the Broken Hill area.

Having moved to Melbourne, in 1885 McBryde became an original investor in public script of the floated “Broken Hill Proprietary Co Ltd” (BHP); at the first meeting of shareholders held at 121 Collins Street, Melbourne on 15 December 1885 he was elected a director (1885-1920), a position he held until his death which included two terms as chairman (1895-97, 1915-17) the later term involving the official opening of the Newcastle steelworks in June 1915, then the largest of its kind in Australia. He also served on the boards of a number of BHP related companies including “Broken Hill Block 10 Co”, “Mount Lyell Mining & Railway Co Ltd”, and “Silverton Tramway Co” which between 1888 and 1908 paid some £1 million in dividends. Along with (Anthony Edwin) Bowes Kelly (St. Kilda Cemetery), William Jamieson (q.v.), William Knox (Boroondara Cemetery), WR Wilson and James Reid, McBryde was part of a select group of mining magnates who between 1885 and 1914 controlled the main base-metal mining fields; powerful, progressive and passionate, their control was exercised towards the common good of the nation.

Described as a “large man with light eyes and a walrus moustache”, McBryde was elected to the Legislative Council seat of North-West Province (1891-96) and South-East Province (1901-19); for a brief period he served under Thomas Bent (q.v.) as Minister of Public Health (1908-09) and was “among the members of the first rank…shrewd, broad-minded, who was always ready to give a fair deal to all classes”. Residing for many years at Kamesburgh – North Road, Brighton, in September 1918 the Department of Repatriation purchased the Lloyd Tayler (q.v.) designed colonnaded mansion later funded through the £25,000 donated by the wealthy financier WL Baillieu (1859-1936) and his brothers for use as a repatriation hostel for disabled veterans.

McBryde died at his Wallace Avenue, Toorak home on 24 November 1920 from heart disease with an estate valued at £55,494; on 2 August 1883 he married Ellen née Menzies.