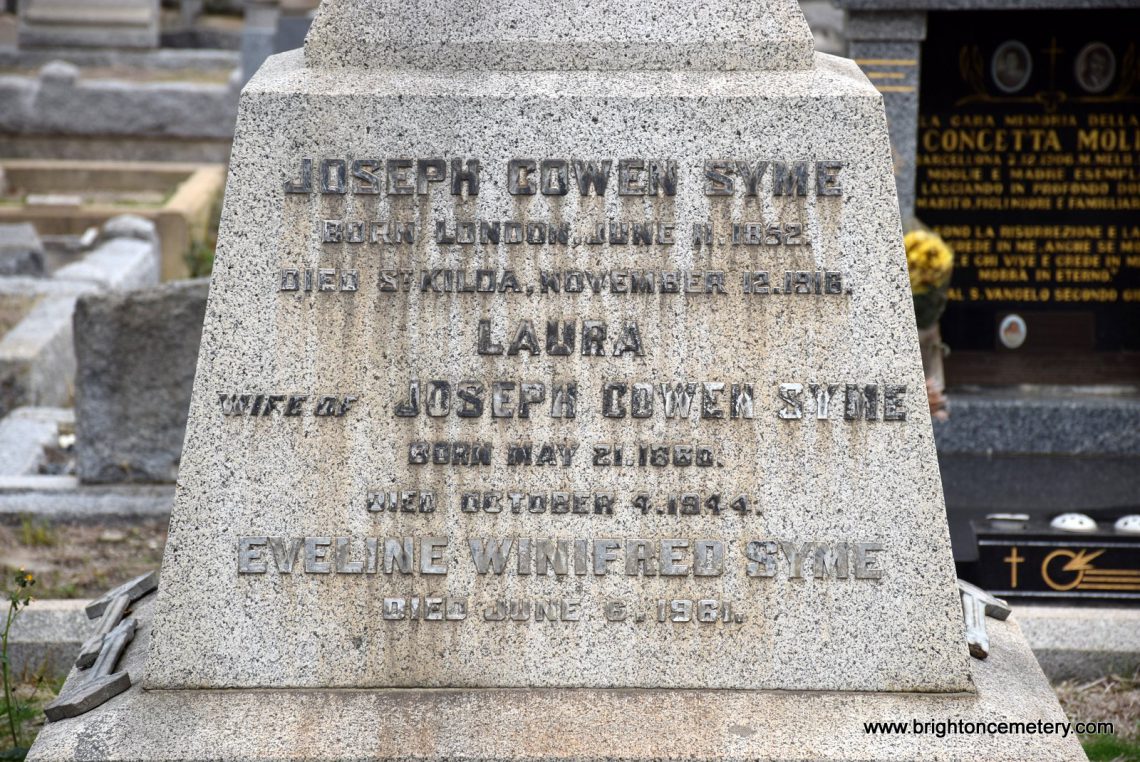 The third son of Ebenezer Syme (1826-60, Melbourne General Cemetery) and Jane née Rowan who in June 1856 bought the insolvent Age newspaper for £2,000; Joseph was born at Huddersfield, Yorkshire, England on 12 June 1852 and on his return to England on his father’s death was educated at Huddersfield and later King’s College, London.

Along with his brothers, Syme returned to Victoria and completed his education at Melbourne University before joining The Age in the counting-house in late 1868; “a forceful character”, Joseph argued with his renowned uncle David (Boroondara Cemetery) that his brothers should be allowed a greater share in the business and this was agreed to by his mother who became the beneficiary of Ebenezer’s share. Joseph became a junior partner with a quarter-share in the business on 21 October 1879; by the early 1880s he was business manager with chief responsibility on the managerial side of the business while David retained the all-important editorial policy that allowed him to shape the political and social landscape for nearly five decades.

While the fortunes of the paper flourished with the economic prosperity of the 1880s, the partnership between uncle and nephew was in marked contrast. Both became increasingly estranged and rarely spoke until the partnership broke up in bitterness in March 1891 after 12 stormy years. Always mindful of representing his father’s interest in the paper, such was the degree of bitterness that Joseph was moved to write in July 1890: “You appear to consider that you are licensed to criticise freely, and like some divinity to enjoy an immunity from criticism yourself”. With his £140,000 share in the business (£156,674 with interest), Syme went on to become a pastoralist in New South Wales and a business director notably with “Mount Lyell Mining & Railway Co Ltd”, “Silverton Tramway Co” and “Commonwealth Bank of Australia”.

Residing at Rotherfield – Tennyson Street, St. Kilda he died on 12 November 1916 after suffering a severe stroke some months ago survived by his wife Laura (d 1944) and daughter Eveline (q.v.).