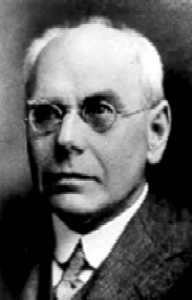 Interred in the same gravesite as his parents George Syme (q.v.) and Susanna née Goodier is George Adlington who went on to become a world-famed surgeon. Born at Sherwood, Nottinghamshire, England on 13 July 1859, Syme came to Melbourne with his parents and was educated at Wesley College before attending University of Melbourne in 1876 (MB, 1881; B.Ch., 1882; MS, 1888); in London he studied at King’s College Hospital (MRCS, 1884; FRCS, 1885) under the renowned Joseph Lister.

On his return to Melbourne in 1887, Syme steadily worked his way through the profession and went on to become one of the most respected and influential surgeons of his era with a world-wide reputation; in 1893 he performed the first successful removal of an intra-cranial meningioma in Australia. He also practised general and abdominal surgery, ophthalmology, otolaryngology, neurosurgery and orthopaedics. A man of honesty and integrity, highly intelligent, but of dour expression, he was known as ‘Silent Syme’ for his quiet and reserved nature. From 1887 to 1919, Syme taught a generation of students during his time with the Melbourne Hospital as honorary surgeon; from the earliest days of his career until the time of his death, he was associated with the hospital as student, resident, surgeon, consultant surgeon and president of the board of management.

In the Great War, he was appointed chief of the surgical staff with No. 1 Australian General Hospital in October 1914 and went on to serve as consulting surgeon to the British hospital ship Gascon where he was present at the landing and responsible for the returning shipload of seriously wounded soldiers; it was through performing his surgical duties that Syme contracted a career threatening injury to his hand and was invalided to England. He returned to Australia early 1916 but continued with both the St. Kilda Road Base Hospital and the Caulfield Military Hospital until his appointment was terminated in December 1916 with the rank of colonel. President of the Victorian branch of the British Medial Association (1908, 1919) and chairman of the federal council (1922-29), the crowning achievement for Syme came in 1927 when he was appointed first president of the Royal Australasian College of Surgeons.

Residing at Chesterfield – 4 Mayfield Avenue, Malvern he died from cerebral haemorrhage on 19 April 1929 survived by his wife Mabel née Berry (1864-1931) whom he married on 10 May 1899. A contemporary during his time at Melbourne University, Sir James Barrett (Melbourne General Cemetery) acknowledged Syme as “a splendid, methodical, accurate student, and a great worker” while his great friend Sir Richard Stawell (1864-1935) said;

“Though in the future the medical profession here may forget his name and not remember his work and science, the influence of his character and personality, of his honest-mindedness, and truthfulness, can never pass away”.