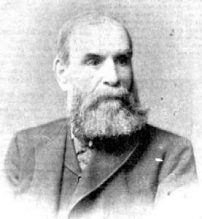 Born at Montrose, Scotland on 10 October 1821, the son of George Alexander Syme a schoolteacher and Jean née Mitchell; his younger brothers were Ebenezer (Melbourne General Cemetery) and David (Boroondara Cemetery), the latter whose proprietorship of The Age helped shape the political and social landscape of Victoria for over five decades.

At the age of fourteen he entered the University of Aberdeen gaining an MA before studying theology and ultimately rejecting the dogma of both the Established Church of Scotland and the Free Presbyterian Church; under the influence of Rev James Morrison at Kilmarnock, Syme then went on to become a Baptist minister at Nottingham, England (1848-63) where he was said to have been active in radical progressive social causes notably Temperance, the early closing movement, shorter hours of labour, and the extension of suffrage.

Described as “kindly, calm and considerate when unexcited, but incoherent under stress”, bad health forced Syme to migrate to Victoria in 1863. He rejected religion becoming a secularist, joined The Age and edited the paper for eight months in 1866 during his brother’s trip to England; for many years he was editor of The Age’s country journal, The Leader (1863-85) until ill-health forced his retirement; The Age described his influence as “a staunch Liberal and through little known to the Melbourne public, he did valuable service to the cause of Liberalism in the colony with his pen for many years”.