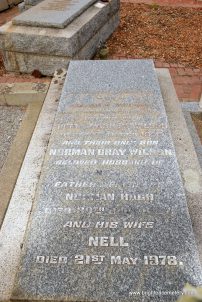 Norman Wilson was born at Werribee, Melbourne in 1849 the son of Alexander Wilson, a pioneer pastoralist who migrated from Ireland in the early 1840s settling in at Mount Emu in the Western District of Victoria.

At the age of 20 he entered into partnership with his brother Hector and purchased a number of sheep stations in the Wimmera (Kennell and Vectis), Queensland (Curranuya and Coogny) as well as part-owner of others (Trawalla near Ballarat); the partnership flourished and they were believed to have made an enormous amount of money through sheer hard work. They later “set out to have a gay time” and toured Great Britain and Europe which included a stay at Monte Carlo where they managed to turn over £20,000. The Australasian noted “his slim, upright figure, and just the faintest suspicion of brogue in his speech, in his heyday might have passed for the original of one of Charles Lever’s rollicking, hard-riding, and hard-fighting Irish dragoons”.

Prominent in racing circles since the early 1870s, Wilson was a convener of a steeplechase meeting (“The Gold Cup”) on 24 March 1876 at Dowling Forest, near Ballarat which resulted in the formation of the Victorian Amateur Turf Club (VATC), “a body which is second only in importance and prestige to the Victorian Racing Club”. In 1878 the club moved its headquarters to Melbourne and took over the Caulfield racecourse. A member of the committee from its inception (1876-98) and later as a trustee, contemporary records regarded Wilson “as the founder of the VATC”. But it was as a judge that Wilson is best remembered being appointed to the position on 10 February 1905 and later to the Victoria Racing Club (VRC) at Flemington in June 1913 which he held at the time of his death. He also raced a number of horses but with little success; amongst them were Ringwood (Australian and Hobart Cups, 1885), Blue Mountain (Caulfield Grand National Steeplechase, 1887), Bolton (Ararat Cup, 1893) and Canary “one of the best jumpers of a period when 5ft fences were common”. Contemporary writers of the day wrote of Wilson as “a fearless straight-goer…a splendid type of sportsman and a daring and skilful rider in his day”.

Residing at Coongy – 8 Charnwood Road, St. Kilda, he died on 1 February 1924 after an illness lasting a few weeks survived by his wife Susan née Gray; the Coogny Handicap was named in his honour.