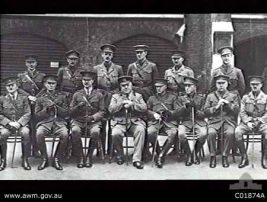 William Williams who was a pioneer of military medical tactics was born on 30 July 1856 at Lyon’s Terrace, Sydney, the eldest child of William Williams, medical practitioner and Ellen née Titterton. After his education at the New School and Sydney Grammar School, he studied medicine at University College, London (MRCS, 1879; LRCP, 1880) before returning to open a private practice at Darlinghurst; in 1885 he was honorary surgeon at St. Vincent’s Hospital.

Williams’ career in the armed forces, spanning over 35 years began in 1883 when he joined the New South Wales Artillery as a staff surgeon with the rank of captain. Two years later, he served with the unit in the Sudan campaign (1885) as Principal Medical Officer – a period that enabled Williams to experience first-hand the problems of the existing medical arrangements; he concluded that the lack of mobility and inadequate response times hampered the success of medical efficiency on the battlefield, and thus began a period of reorganisation leading up to the Boer War.

Upon returning from Sudan, Williams was appointed Principal Medical Officer to the New South Wales army and began his influence on the service so by the time of the Boer War, the colony was able to mobilise three medical contingents. Arriving in South Africa in November 1899 with the first contingent, in the proceeding operations with the advance of Lord Roberts’ force in the Orange Free State, it was said that no other unit in the British Army made a greater impression that the New South Wales Army Medical Corps under Williams’ command; he was mentioned in despatches, appointed CB, and awarded the Queen’s Medal with five clasps. Returning in January 1901, Williams was promoted Surgeon-General and the following year appointed Director-General of Medical Services when the Australian Army Medical corps was formed; he moved to Melbourne, ceased private practice and was appointed consulting surgeon to St. Vincent’s Hospital.

By the commencement of the Great War, Williams was the most eminent and respected medical officer in Australia. In spite of bad health, overweight and in advancing years, he was appointed to the same post in the AIF by General Sir William Bridges (Royal Military College, Duntroon), however as the war progressed, he was increasingly ignored in favour of the ambitious Lieut-Col (Sir) Neville Howse VC (1863-1930), a staff officer under Williams. Nor did it help that Williams left a bad impression on Bridges during the voyage to Egypt; Bridges’ obsession with the training of the 1st Division prior to the Gallipoli campaign at the expense of the administrative problems only compounded Williams’ isolation. He saw no active service and was given positions more with status than any meaningful responsibility and returned to Australia in 1916 with a “bitter and not unnatural chagrin at the turn of events”.

With a knighthood awaiting his return, it was little compensation and he died just three years later from cardiac disease on 10 May 1919. Regardless of the injustice inflicted upon Williams, his pioneering military medical tactics that saw the formation of a separate specialised unit keeping apace with the front line were adopted by the entire British Army and stand as a monument to his work.