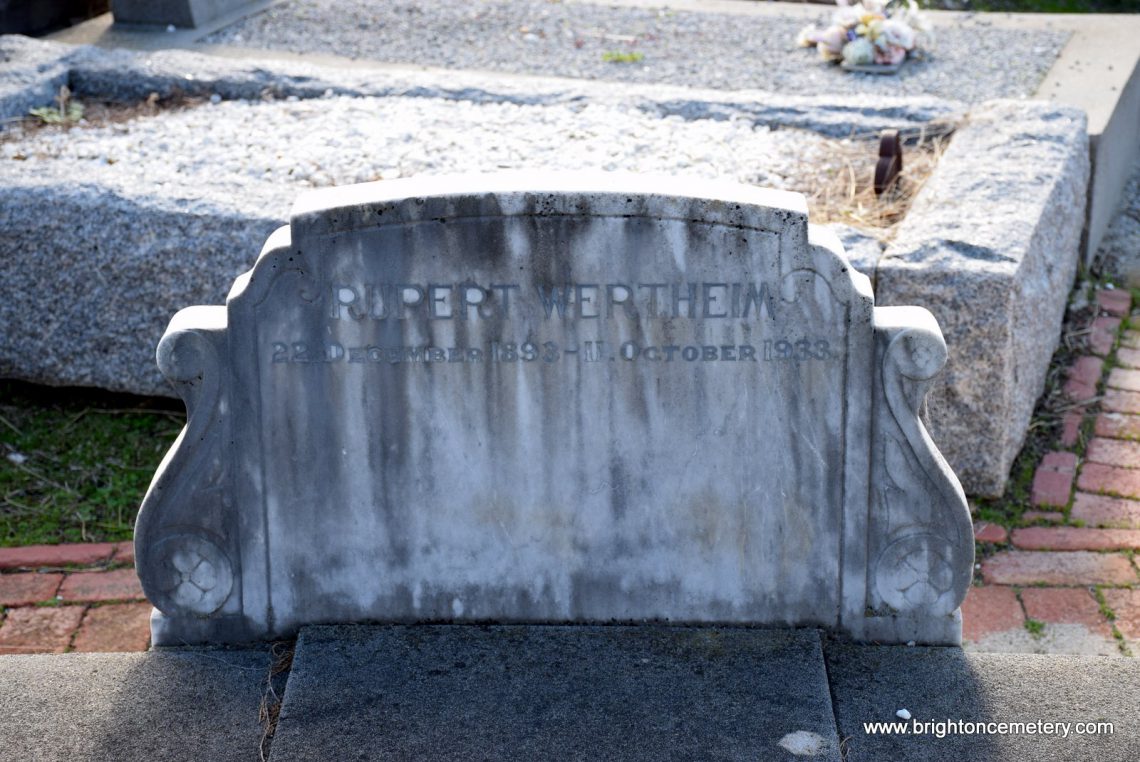 The son of the well-known manufacturer and merchant, Hugo Wertheim (q.v.) and Sophie Emilie (1864-1953), Wertheim was born in Melbourne on 22 December 1893. Educated at Melbourne Church of England (Boys’) Grammar School (1901-10), for a period he worked for his father’s business and was a champion tennis player who for many years represented Victoria in interstate championships (1913-27); in 1922 he played for Australia in a Davis Cup tie against the former Czechoslovakia.

Enlisting on 16 June 1915 as a Private with the 23rd Battalion AIF, Wertheim arrived at Gallipoli just over a month before the end of that fatal campaign before transferring to the 2nd Pioneer Battalion as 2nd Lieutenant on 19 March 1916 and took part in the units’ operations at Pozieres in July-August where it lost 202 casualties; and at Flers in November. In January 1917, he was seconded for duty with the Intelligence Corps and posted to the 2nd Australian Divisional Headquarters; he figured prominently in operations during 1917, in particular Menin Road in September when steps were taken to prepare for the inevitable German counter-attack. Historian CEW Bean wrote;

“to obtain early news of it [the counter-attack], German prisoners as they arrived were taken to forward centres for interrogation, and by 7 a.m. Captain Wertheim…learned from one of them that the counter-attack division for that sector lay at Moorslede and Waterdamhoek, and would probably come up in omnibuses and debouch about 9 or 10 a.m. from the north of Polygon Wood”.

Largely for the important role he played in the campaign by providing this vital information of the planned counter-attack, Wertheim had the privilege of being mentioned in the personal despatches of the commander-in-chief of the British Army, Sir Douglas Haig on 7 November 1917. In March 1918, three months after the five Australian Divisions were finally unified into an Australian Corps, Wetheim was transferred to Corps Headquarters and took part in the great advances of that year. Three times mentioned in despatches, he returned to Australia in February 1919.

In civilian life, Wertheim co-founded with Clive Williams a stock and share brokerage firm of “Williams & Wertheim” (Collins Street, Melbourne) and continued to play tennis until in 1929 he was struck with a debilitating illness that left him bed stricken for two years. Eighteen months before his death he defied doctor’s orders and went about his business affairs until he suddenly collapsed in the city and died at Mount St. Evin’s Hospital, East Melbourne on 11 October 1933 aged 39 survived by his wife Marjorie née Felsted and three sons. Amongst the many sporting and business luminaries to attend were Sidney Myer (Box Hill Cemetery), Henry (Harry) Hopman (1906-85), (Sir) Norman Brookes (St. Kilda Cemetery), Hector (Pat) O’Hara Wood (1891-1961) and members of the Baillieu establishment family.