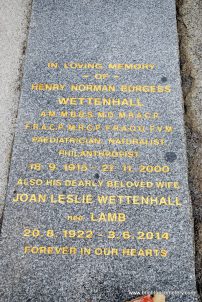 Buried in the same plot as his parents, Wettenhall was born on 18 September 1915 in England the son of Roland (q.v.), a medical practitioner serving with the Royal Army Medical Corps and Jane née Creswick (1884-1928); after his education at Geelong College (1930-34), he graduated with honours at the University of Melbourne (MD, MBBS, 1940) before being appointed resident medical officer at the Royal Melbourne Hospital. The following year he enlisted as Surgeon-Lieutenant in the Royal Australian Navy (1941-44) on HMAS Nepal (UK and East Africa) and HMAS Shropshire (New Guinea) until ill-health forced his discharge.

On his return Wettenhall began a lifelong association with the Royal Children’s Hospital (1948-90) where he became fascinated with paediatric endocrinology – the science of hormonal disorders in children – he recognised an association between neonatal goitre and maternal asthma; he served as senior physician (1948-73), endocrinologist (1973-80) and honorary consulting endocrinologist (1980-90). As Australia’s first specialist paediatric endocrinologist, in 1962 he established the Endocrine Clinic at the hospital and internationally recognised for his clinical trials of oestrogen for tall girls and oxandrolone for short boys; in later years he found it distressing that a minority of those felt they had suffered as a result of treatment and supported follow-up studies.

Wettenhall was a keen ornithologist and conservationist. His love of birds was ignited by yellow robins at the family’s beach-house at Mount Martha; his private collection of some 300 fine volumes covering natural history, Australiana and Antarctica was sold in 1995 to fund the Norman Wettenhall Foundation to support “the protection, maintenance and understanding of Australian living nature and the environment and habitat with which it exists, with particular emphasis on bird life”. Described as “urbane, involved, talkative, persistent, gregarious, generous and fun”, he was associated with many organisations including National Trust (1956-77), Australian Conservation Foundation (1965-69), National Museum of Victoria (1963-78) and council (1978-83), inaugural chairman Heide Park and Art Gallery (1980-88) and Geelong College (1960-91) of which Wettenhall House is named.

“as a clinician, Norman was warm and compassionate, and a meticulous observer and recorder of information. As a person he was blessed with an extraordinary good nature, boundless energy and enthusiasm for a wide range of causes, and youthful exuberance. He had a profound sense of contentment about him and was never remotely envious of anyone else, yet neither did he ever doubt his own ability. He was generous to his colleagues and never sought fame or recognition for himself”.