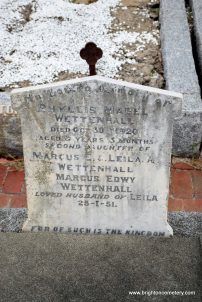 Born on 26 January 1876 at Carr’s Plains, near Stawell, Victoria the son of Holford Highlord Wettenhall (1840-1920, Stawell Cemetery) and Mary née Dennis (1846-1917); his father was a noted pastoralist and politician in the Wimmera district. Marcus the sixth born of nine children and elder brother of Roland (q.v.) was educated at the local state school, Toorak and later Geelong Colleges before matriculating in 1893 later becoming an outstanding athlete.

But he was always destined to follow in his father’s footsteps; by 1907 he was actively managing the 400-acre orchard Glen Holford, near Pomonal, on the northern slopes of the Grampians established by his father around 1890 until his health broke. A subsequent subdivision of the Carr’s Plains run in 1909 saw Wettenhall acquire 3000 acres which he held until 1923 and was a pioneer of the bulk handling of wheat in Victoria having designed and built his own silos at Mernong in 1919. Prominent with the Central Fruitgrowers’ Association of Victoria, Wettenhall had his sights on the political arena; in 1912 he joined the People’s Party to join the fight against King O’Malley’s (c1858-1953) Commonwealth Bank scheme only to become a supporter of the bank by 1920 describing socialism as “flabby golliwog”.

Elected to the seat of Lowan in the Legislative Assembly (1920-35) for the Victorian Farmers’ Union he became briefly honorary minister (Sep 1923-Mar 1924) (“few saw any signs of political genius to justify early promotion”) he was of that rare visionary breed whose advocacy on many issues notably transport made him “years ahead of his colleagues” whose speeches were “frequent, vigorous and well argued”. Described as “of middle height and medium build, with brown hair, pale complexion and sharp features”, in 1928 Wettenhall was compared to the great Duke of Wellington – “a hard master, sparing of praise, lavish of censure, often brusque to the edge of brutality” who as a politician had come “thus far and no further, who cannot cherish very fond hopes of one day sitting in the premier’s chair”.