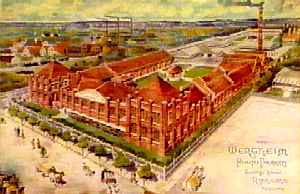 Born on 12 July 1854 at Hesse Cassel, Germany, Wertheim migrated to Victoria in 1875 “thoroughly equipped with a sound business and commercial training” not to mention an abundance of courage, determination and perseverance to succeed; against well-established businesses with unlimited capital and a misconception that German goods were “cheap and nasty” he immediately established a manufacturing firm as well as an importer of Hapsburg pianos, American organs and Electra cycles.

For some four decades, “Wertheim” became synonymous with sewing machines; over time the firm “developed into one of the best known and largest establishments of the kind in the Australian States…and acquired a world-wide reputation”. After importing pianos for many years, the company went on to build a factory in Bendigo Street Richmond (later Channel 9 studios from 1955) designed by Nahum Barnet at a cost of some £25,000; it was opened with much fanfare in October 1908 attended by over 300 persons amongst them Andrew Fischer (1862-1928) who was to become prime minister the following month, Senator Sir Robert Best (1856-1946), Senator William Trenwith (q.v.), Melbourne Lord Mayor Sir Henry Weedon (Melbourne General Cemetery), Samuel Mauger (Melbourne General Cemetery), Frank Tate (Box Hill Cemetery), the musicians Percy Grainger (1882-1961) and George Marshall-Hall (q.v.), Archdeacon William Hindley (Boroondara Cemetery) and Carl Pinschoff (Boroondara Cemetery). The premier Thomas Bent (q.v.), never one to miss an occasion made a typical egotistic speech saying that “he had helped to ensure the land for the factory” while the Prime Minster Alfred Deakin (St. Kilda Cemetery) in a characteristic speech noted that the factory was the first in Victoria to make pianos and paid tribute to “the enterprise, courage and the capacity of Wertheim deserved all honour”. The last word was left to Theodore Fink (1855-1942) who referred to Wertheim “as having grown from the controversial position of a merchant into a patriotic position of manufacturer. Few men with such opportunities for a life of ease would have embarked on such an enterprise” in a statement which was greeted by the dignitaries with loud applause.

Wertheim died the day before his 65th birthday having been in failing health for some time; his home Gotha – 24 Kensington Road, South Yarra which was built in the 1880s at a cost of £40,000 was demolished in the mid 1930s. The former Victorian premier Jeffrey Gibb Kennett AC (b 1948) is a descendant of Hugo Wertheim.