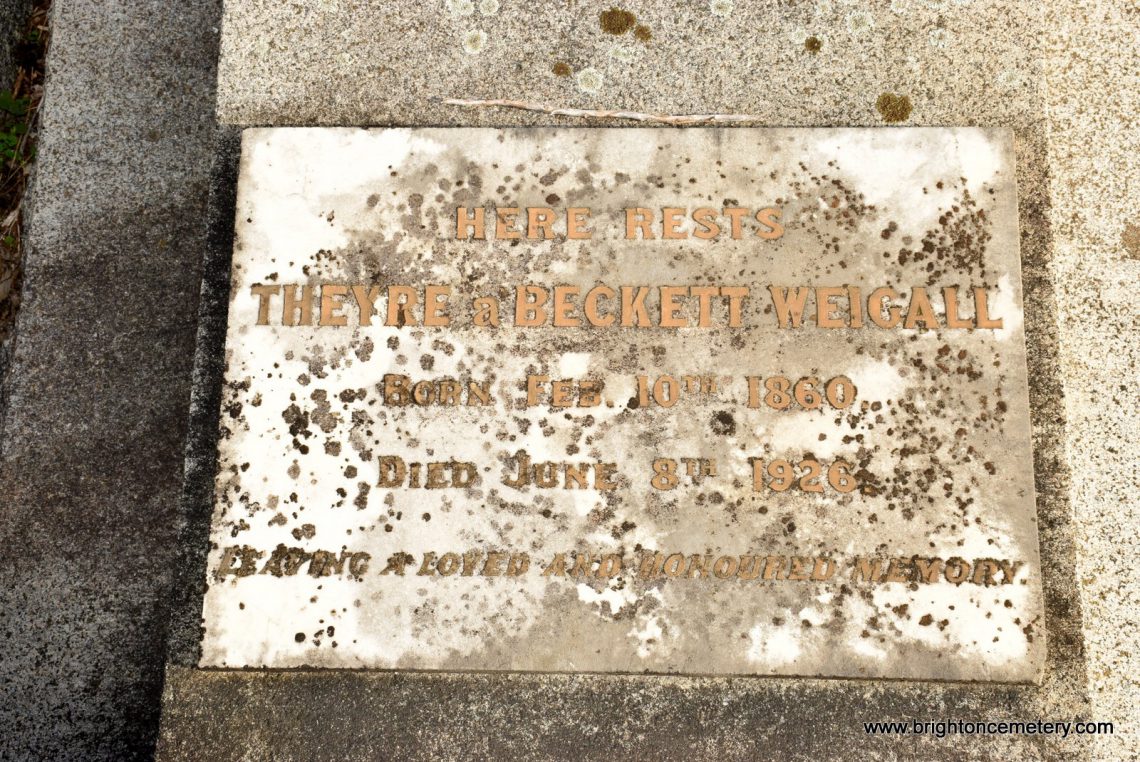 Power, prestige and prosperity are bywords for colonial dynasties like the à Beckett family. But unlike the Clarkes, the Chirnsides and the Armytages, the à Becketts inherited a queerness out of character with their upper-class standing. Take for example, this passage in Joan Lindsay’s (1896-1984) delightful book “Time Without Clocks” (1976) describing the return to Australia with her husband (Sir) Darryl Lindsay (1889-1976);

“My Father whom we later learned had shown no marked enthusiasm at the prospect of an artist son-in-law had bicycled down to the wharf to meet us…A firm believer in established marriage, the Church of England, Debentures and the Melbourne Club, in small matters my Father had small regard for the conventions…he had arrived at the Pier bolt upright on his old-fashioned push bike across whose handlebars was strapped a long-handled tennis racquet shaped like an egg-spoon. He wore much washed white and grey striped flannel pants and for reasons best known to himself an almost threadbare sports jacket of Harris tweed. His handmade buckskin shoes were dazzlingly white. His tweed cap several sizes too large was pulled hard down over bright blue eyes half hidden by tufts of greying eyebrows”.

That Joan Lindsay’s father was at the time a senior King’s Counsel as well as an acting judge of the Supreme Court made no difference. The à Beckett heritage took little heed to matters of convention and fashion.

Theyre à Beckett Weigall (1860-1926) was a third generation member of the à Beckett dynasty, a dynasty synonymous with the law. Indeed, the à Becketts were associated with the Bar and the Bench ever since the arrival in 1846 of Theyre’s great-uncle Sir William à Beckett (1806-69) who was appointed a resident judge (1846-52) and later the first Chief Justice of the Supreme Court (1852-57). However, it was Theyre’s grandfather, Thomas Turner à Beckett (1808-92, Melbourne General Cemetery) who was responsible for the à Beckett name being associated with the law until at least the death of William Weigall (1874-1959; Springvale Botanical Gardens) in 1959. By then, the à Beckett name had lost its place in the public’s consciouness and focus had shifted to another branch of the dynasty – the artistic Boyds.

Born on 10 February 1860 in Elsternwick, Melbourne, Theyre was the eldest child of seven children to London-born parents Theyre Weigall (1831-1911) and Marian née à Beckett (1841-1919, CofE*O*93) who married in April 1859. Theyre senr arrived in 1854 on board the John Banks not long after his future wife. The story goes that Weigall was chosen as associate to Justice Henry Stonor after his appointment to the Supreme Court Bench before constitutional government. An accusation of being a party to improper practices led to Stonor’s hasty return to England to successfully clear his name leaving Weigall “a strange young man in a strange young country”. Though admitted to the Bar in December 1860, he never practiced law, instead serving in the Treasury as Curator of Intestate Estates until his retirement in 1895; he died on 20 November 1911 aged 80 and is buried with his son Alfred (1863-88) in CofE*U*122. Theyre jnr and his brothers attended the traditional à Beckett family school – Melbourne Boys’ Grammar – from 1870 to 1875 under the brilliant Dr John Bromby (1809-89, Melbourne General Cemetery). Head of the school in his final two years, he won the matriculation classics exhibition; Sir Edward Mitchell, KC (1855-1941, St. Kilda Cemetery) was a fellow student and life long friend in the law and sport.

From Melbourne Grammar to Melbourne University, (Trinity College, 1875-80) Weigall followed the only vocation then known to the à Becketts – law (LL.B, 1880; LL.M, 1886). Not that he needed any encouragement; his uncle (Sir) Thomas à Beckett (1836-1919, St. Kilda Cemetery) was a rising equity lawyer and lecturer in law of procedure at the University (1874-81). It was while at university that Weigall became a respected rival and lifelong friend of (Sir) Isaac Isaacs (1855-1948, Melbourne General Cemetery) and the two were to share first-class honours with Weigall winning the exhibition in 1877-78. Called to the Bar on 5 April 1881, Weigall read in his uncle’s chambers specialising in equity law, procedure and company law; when Uncle Tom was elevated to the Bench in September 1886, Weigall took over a large part of the practice. Weigall’s expertise was recognised in the administration of trusts and the “comparatively firm foundation…of trusts in Victoria …is attributed in no small degree to him”. By the late 1890s, Weigall’s rising reputation attracted the attention of The Australasian who noted his courtroom manner when “unravelling a complex argument, his habit is to support his right elbow with the other arm, while he saws the air with his outstretched hand, fixing his gaze the while on a remote part of the ceiling”. A King’s Counsel from 20 November 1906 until his death, Weigall practised widely in the Victorian Supreme Court and the High Court; in 1919 he was one of only three practising KCs in Victoria.

Outside the law, Weigall loved the open air. Tennis was a life long passion; he was president of the Lawn Tennis Association of Victoria (1909-25). And apart from cycling, he loved nothing more than the monthly walks in the country with the Wallaby club.

Described as a “kindly, humorous and witty man, charming and courteous”, Weigall’s elevation to the Bench and likely Knighthood was assured, but for his opposition to capital punishment. First offered an appointment to the Supreme Court in 1920, he refused, but later accepted a temporary appointment (1923-26) – a position he held until his sudden death from pneumonia on 8 June 1926. As a judge, his rulings were sound, though slow, verbose and cautious earning him the good humour of his peers. Acknowledged as an equity specialist, he never sat in criminal cases.

The end for Weigall came suddenly and unexpected. Having sat in Chambers on the Thursday before his demise, he was suffering a mild cold. When the Courts rose, he walked to South Yarra with Justice (Sir) Frederick Mann (1869-1958) much for the worse of wear and his condition developed into influenza. On his doctor’s orders, he remained in bed throughout the weekend until his condition became serious on Sunday night and he died the following morning. News of Weigall’s demise caused an outpouring of grief amongst the legal profession like no other then or since. The Chief Justice Sir William ‘Iceberg’ Irvine (1858-1943) spoke with great emotion when he said;

“The great catastrophe which has fallen upon us makes it extremely difficult for me to give expression to our feelings…His loss to the Bench and to the community is irreparable. Though all people knew of him as a distinguished lawyer for many years, it is only those of us who were closely associated the few short years that he occupied a position on the Bench, who are capable of estimating the true measure of his greatness as a judge…he was capable of mastering any judicial problem that came before him…his place will be almost impossible to fill. He was a fast friend, a loyal colleague, and a very distinguished judge”.

And to no one was the news of Weigall’s death more severe than Sir Isaac Isaacs who said of his fellow judge that “he never lost a friend or made an enemy”. The cream of the legal profession from Sir Adrian Knox (1863-1932), Chief Justice of the High Court down attended an impressive funeral at the Brighton General Cemetery that left the Weigall family home St. Margaret’s – 151 Alma Road, East St. Kilda punctually at 3:00pm. Unpunctuality was anathema to Weigall, as Joan Lindsay put it, the à Becketts were “a family of clock winders, conscientious followers of road maps and railway guides”.