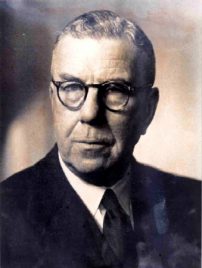 Described as “the medical statesman of twentieth-century Australia”, Colville was for many years a central figure in establishing the Australian Medical Association as the major representative body of the medical profession.

Born on 27 August 1891, the son of John William Colville, Cecil as he was known was educated at Melbourne (Boys’) Grammar School (1900-08) where in his final year he gained a scholarship with honours and was Dux of the school. In 1914 he graduated at the University of Melbourne (MB, Ch.B, 1914; MS, 1920) with first class honours in surgery, obstetrics and gynaecology and spent a year as resident medical officer at the Alfred Hospital. The following year he enlisted for overseas active service with the British Army serving with the Royal Army Medical Corps and later with 46th Field Ambulance (15th Scottish Division), before returning to Australia in May 1916. In what must be a record for the longest continuously serving general practitioner, Colville ran a private medical practice in Burke Road, Hawthorn from 1918 to 1982.

Joining the British Medical Association in 1928, he went on to serve in various positions until his retirement in 1973: chairman of the Victorian Branch Council (1939-66, President 1940); and member of the Federal AMA Council (1939-62, President 1955-62). In 1962, Colville’s standing as a leader in the medical profession was acknowledged when he was elected first President of the Australian Medical Association (1962-64) the same year that he was knighted.

He died on 16 April 1984 aged 92 and was cremated; his ashes lie with his wife Harriet née Tatchell (1890-1982) whom he married on 2 December 1916. The AMA paid tribute to “a great champion to the profession” by noting his outstanding achievements with both the BMA and AMA in Victoria and on a Federal level.