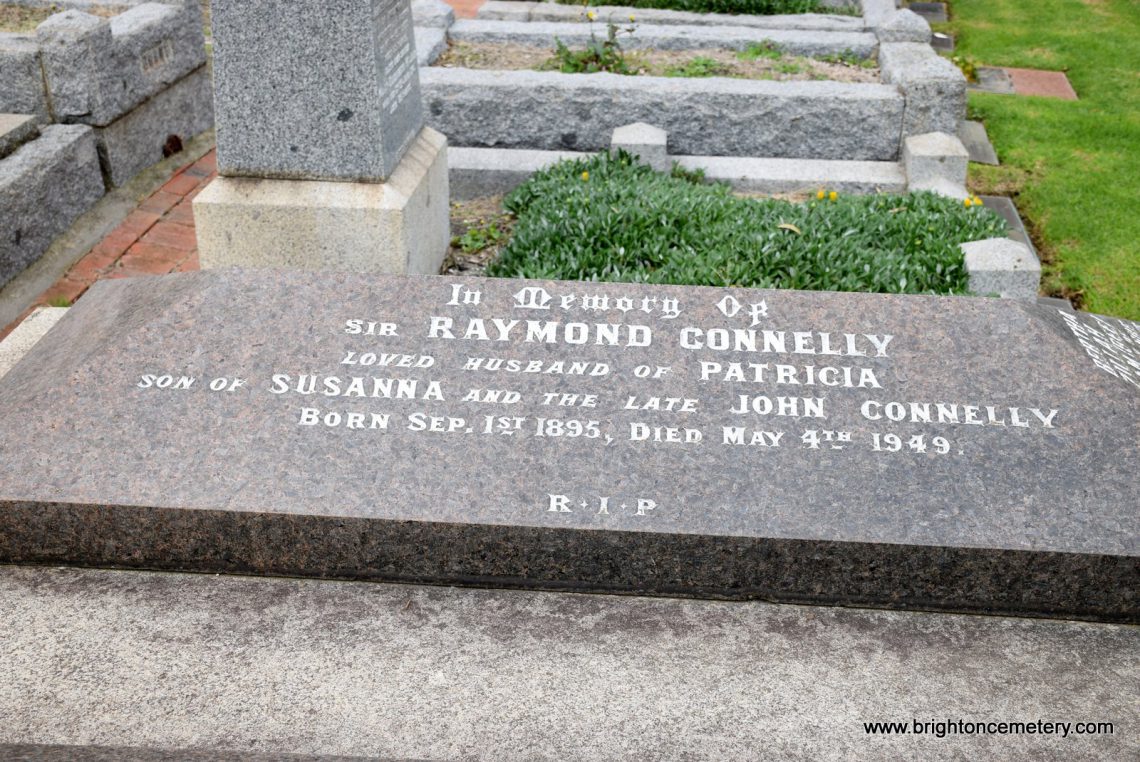 One of two Melbourne Lord Mayors interred at Brighton General Cemetery, Connelly was the son of John Connelly and Susan née Rooney. After an experience in the outback, he settled into the world business joining the family company “Moreland Grain & Free Stores Pty Ltd” (Tinning Street, Brunswick); at the time of his death he was managing director. Years later he established “LaTrobe Motors Pty Ltd” (Latrobe Street, Melbourne), the city’s first hire car company.

While Connelly’s business background was somewhat unorthodox for a man intent on entering local politics, and no less than the Melbourne City Council (1934-49), this he did when he was elected to the South Ward in November 1934 at the age of thirty-nine; he later represented the Gipps Ward from 1939 after a reorganisation of the seats. As a non-labour representative he served on many committees including Public Works (1938-), Licensed Vehicles (1935-40) and Abattoirs & Cattle Markets (1936-49). In November 1927 he married Lurline Hennesy (d 1944), daughter of Sir David Hennesy (Melbourne General Cemetery) a previous Melbourne Lord Mayor (1912-17) and sister of Valerie, wife of Bernard Heinze (q.v.). During his three successive terms as Lord Mayor (1945-48), Connelly was noted for his visionary outlook; he campaigned for a brighter and more tourist orientated city; advocated the relaxation of liquor laws; encouraged Sunday entertainment and longer hours of shopping; and the professional training for hotel and tourist staff.

His term as Lord Mayor was to an extent overshadowed by his tireless work in securing the 1956 Olympic Games. To great affect, Connelly used his cheery, outgoing and engaging personality to lobby the many international delegates and lived just long enough to saviour the announcement having passed away just six days later from a heart attack on 4 May 1949.

Tall (6 feet 1 inch) and large (16 stone), his funeral was one of the biggest ever held at the Brighton Cemetery; his pallbearers included the Minister for Immigration Arthur Calwell (Melbourne General Cemetery), and the Premier Thomas Holloway (Point Lonsdale Cemetery).