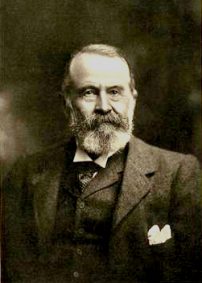 Born on 6 August 1826 in London, the eldest child of Sylvester Brown (1790-1864) a shipping master with the “East India Co” who made and lost a fortune in the Port Phillip colony and Elizabeth née Alexander; the family changed the spelling to ‘Browne’ after the Captain’s death (“a self-made man of imperious temperament and at times rough manners…difficult and high-handed, apt to quarrel”). While at Sydney (1831-39) he was educated at a private academy in King Street, then Sydney College (“a grounding in the code of a gentleman”) under William Cape (1806-63) before completing his education in Melbourne after the family moved to Hartlands on the banks of the Yarra at Heidelberg in 1839. By 1844, Browne was a squatter in the Portland district where he prospered with The Swamp (1844-59, 1861-63); his father’s breakdown and ruin in 1846 after the economic depression led to Browne supporting his mother and siblings (“it was a last chance for the family…if Brown failed, he would ruin the family entirely”). But like his father, prodigal expenditure and speculative adventures brought his downfall and by 1863 his debts had amounted to £40,000 having lost everything.

Compelled to give up pastoral life and begin a second career as a civil servant (1871-95) (“in all colonies civil service posts were favoured by pastoralists down on their luck”), his first appointment was in April 1871 as Police Magistrate and Commissioner of Gulgong Goldfields (1871-81); amid strident criticism from the Gulgong Guardian (“He is, we must say, utterly unsuited for the charge of this goldfield”) he served until 1881 before being transferred to Dubbo (1881-84) and later Albury (1884-95) before retiring. But it was Browne’s third career that earned him wide acclaim. Writing out of financial necessity from 1870 under the non de plume ‘Rolf Boldrewood’, he wrote some seventeen works over forty years of writing on colonial Australia from “Ups and Downs” (1878) to “The Last Chance” (1905); among the most popular were “The Miner’s Right” (1890) (“marries realism and romance”), “The Squatter’s Dream” (1890) and “Babes in the Bush” (1900) (“has a breeziness and enthusiasm and a lack of moralising which make it one of Browne’s more readable novels”). His most renowned work was the classic “Robbery Under Arms” (1882) considered one of the first truly great quintessential Australian novels, a stirring account of romance, adventure and intrigue. First published as a serial in the Sydney Mail from July 1882 to August 1883 and later dramatised, filmed and published in many editions, it has never been out of print; its success “was supposed to have embarrassed Browne…who found the attention at odds with his taste for gentlemanly discretion”. Such was his popularity, a letter addressed to “Mr Rolf Boldrewood, Melbourne, Victoria, Australia” would find its recipient at the Melbourne Club.

Described as “genial and bearded…middle height and robust constitution”, Browne died on 11 March 1915, just a few weeks before the landing at Gallipoli.

(Image by permission of the National Library of Australia, nla.pic-an23251768)