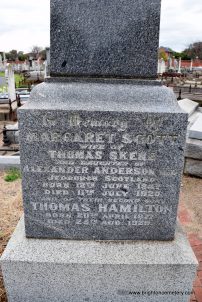 The son of Thomas Skene (q.v.), pastoralist and politician and his wife Margaret née Anderson (1847-1920), Skene was born on 20 April 1877 at Hamilton, Victoria. He was educated at Hamilton & Western District College (1889-90), Geelong Grammar School (1891) as a day boarder and later Melbourne Church of England Boys’ Grammar School (1892-94). Skene went on to manage his father’s property Marnoo near Rupanyup and later Bullengarook near Bacchus Marsh. During the Great War, he was commissioned in the 14th Battalion, Northumberland Fusiliers bring twice invalided only to be discharged unfit for service in June 1917. On returning to Victoria he managed Urana until it was sold for closer soldier settlement.

Skene died on 25 August 1929 and was buried with his parents in the Presbyterian section.