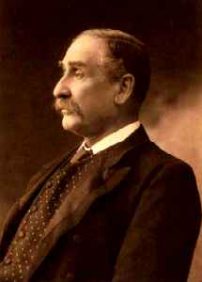 Thomas Skene was born at Mount Mitchell Station, Port Phillip District (Victoria) on 15 December 1845 the son of William Skene (1809-77) and his wife Jane née Robertson (1816-77); his father was a pioneering pastoralist in the Hamilton district and a member of the Legislative Council (1870-76). After his education at Cavendish and Scotch College, Melbourne (1860-64) he spent the years 1868 to 1882 running his father’s property, Bassett near Branxholme where he bred merino sheep. He then sold the station to finance an unsuccessful sheep-farming venture in New Mexico and the USA but was unable to come to terms with the purchase of 212,000 acres of freehold on the Pecos River. Described as “tall, strongly built, spectacled with a ‘wind-chafed’ countryman’s face”, upon returning to Victoria he purchased Marnoo on the Richardson River near Rupanyup (1883-1906) and Urana South (1906-10) later subdivided for closer settlement.

In politics, Skene was elected briefly to the Portland Shire as well as the Stawell Shire Council (1889-91). A strong advocate of Federation, he was successfully elected to the seat of Grampians (1901-06) in the first Commonwealth Parliament as a moderate free-trader; known for his “integrity, common sense and temperate views”, he argued for closer settlement and was an important link between the two non-Labour groups.

(Image by permission of the National Library of Australia, nla.pic-an23504825)