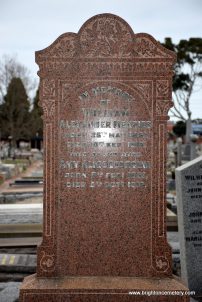 Born on 26 May 1861 at Bendigo, Victoria the son of John Menzies, banker and miner (“one of the first to take up a mining lease on the Bendigo goldfield”) and educated at Melbourne Church of England (Boys’) Grammar School (1870-76) the same year as his brother John (q.v); a keen sportsman, he was in the athletic team (1872) and cricket team (1876) that won the public school’s premiership (“a good cricketer, being a dashing batsmen”).

On leaving school he intended to study medicine but for an illness forced him to take-up a country life and instead became a jackeroo on the Barratta Station, near Deniliquin, New South Wales owned by Henry Ricketson, father of Amy (d 1916) whom he later married. But a career as a pastoralist ended with a fall from his horse and a bout of severe sunstroke; after recovering he visited Europe and Great Britain returning two years later and became a partner in the wool brokering firm of “Synnot Bros” founded by Monkton Synnot (St. Kilda Cemetery).

A keen huntsmen with the Melbourne Hunt Club (“his grey horse Hector was in those days to the fore on every run”), Menzies went on to train a number of horses, notably Culzean which won the 1897 Standish Handicap and the strawberry steeplechaser Curiosity (“that grotesque looking animal”) described by the noted horse writer of the day ‘Terlinga’ (William Cook) (q.v.) as “one of the fastest jumpers over a fence I ever saw. He took off a tremendous way, and when he did fall he came a cropper”. A member of the Victorian Racing Club committee since the early 1890s, in May 1903 he succeeded Frank Dakin as the VRC handicapper (1903-16) without any previous experience, The Argus noting that;

“he had an all-round knowledge of racing, and was a particularly good judge of form. Like every other handicapper, he occasionally made mistakes, but he was in a general way a most successful weight-adjuster, a fact widely recognised by racing men. He had a temperament suitable to the position, and was quite free from prejudices. He did not allow the victory of a hot favourite under his handicapping worry him, as long as he was satisfied that on his known form he had not ‘thrown in’ the horse”.

A member of exclusive The Bohemian’s club, Menzies died from heart failure at his brother’s home St. Ninnians – Bay Street, Brighton on 10 September 1916 having been in ill health for some time.