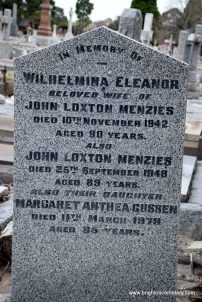 Born in 1859 the son of John Menzies, banker and miner and brother of William (q.v.), Menzies was educated at Melbourne Church of England (Boys’) Grammar School (1870-76) where he played in the cricket and football teams of 1874, 75 and 76. He later founded the stock and share broking firm of “Menzies and Moule” and member of the Stock Exchange committee (1893-1900); he retired from the firm four years before his death. The Argus obituary described Menzies as “a splendid horseman in his youth” as member of the Melbourne Hunt Club, “well-known as an amateur boxer and also a keen naturalist”. He wrote many poems, including “By Gordon’s Grave and other Verses”. In 1888 he joined the exclusive The Bohemian’s Club and was described as “the club Bard”.

Married to Wilhelmina née MacDermott (d 1942) who predeceased him, Menzies died after a long illness on 25 September 1948 survived by three sons and a daughter; he resided at 85 Walsh Street, South Yarra.