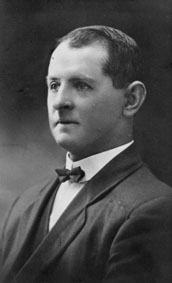 Born on 2 February 1865 into a mining family at Clunes, Cronin worked for a period in the mines until being appointed to the Department of Agriculture in 1886 as an orchard supervisor. As principal of Burnley Horticultural Gardens (1908), he was acknowledged as an expert horticulturist “well-known throughout Australia for his knowledge of trees, plants and flowers”; he had some success in raising new varieties of ornamental plants.

Impressed by his success, and recognising an exceptional ability, he was hand picked by William Guilfoyle (q.v.) as his personal assistant and joined the staff of the Melbourne Botanic Gardens in 1898. Cronin later succeeded Guilfoyle on his resignation in 1909, The Argus noting that “he filled the position admirably…he had the artistic instinct highly developed, abundant energy and a strong personality”; Cronin’s appointment was largely to consolidate Guilfoyle’s accomplishments. Yet, he did leave his mark and among the achievements was the introduction of special displays of magnolias, azaleas, rhododendrons, as well as a large area to Australian plants along the southern and eastern boundaries which was widely accepted by the public. Affected by labour shortages and financial constraints due to the Great War which restricted maintenance and development, he ably filled the role during a difficult period.

Suffering from ill health for a considerable time, Cronin had been absent for some months and died at his home in the gardens on 30 June 1926 survived by his wife Cora née Greenwood whom he married in 1890.