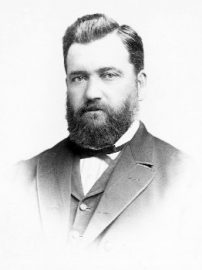 Born and educated on Isle of Wright, England, Baker migrated to Victoria in January 1854 and went straight to Ballarat where he was said to have taken the first brick making machine. Before moving to Richmond in 1887, he was closely associated with mining, commercial and agricultural pursuits in Ballarat and prominent with the Mine Owners’ Association.

In state politics, Baker was elected to the seat of Wimmera (1883-89) and Lowan (1889-94) serving as Minister for Public Instruction and Minister for Customs (1893-94) under Sir James Patterson (Melbourne General Cemetery). As Minister for Public Instruction, he and Thomas Brodribb (Boroondara Cemetery) were in “violent disagreement” and resided over the collapse of the technical colleges and the closure of the Training College. Baker was chiefly known as an advocate of temperance and in Parliament was said to have “rendered most valuable services to the cause of Temperance Legislation”. Among other notable temperance identities of the time were Sir James Munro (St. Kilda Cemetery) and Sir Richard Heales (Melbourne General Cemetery). In a record to rival that of Joseph Brown (q.v.) for the number of electoral defeats – Baker unsuccessfully contested the seats of West Ballarat (1871), Castlemaine (1874), Grenville (1874), Wimmera (twice, 1880), Lowan (1894), and Jolimont (1897).