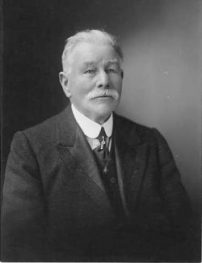 Born in 1846 at Sussex, England son of Stephen Barker, farmer and Hannah née Nagle, Barker was one of the founders of the Victorian Labour Party and a pioneer of trade unionism in Victoria; his early career was notable for the fight for better working conditions for which he was instrumental behind the passing of the Factories Act (1896).

Barker’s first foray into trade unionism was with the Pressers’ Society serving as president (1894-96, 1900-01), secretary (1899) and delegate to the Trades Hall Council (1892-02). A crusader against long hours – himself, ironically working 96 hour weeks – Barker went on to serve as president (1897-98) and secretary of the THC (1901-10), succeeding John Barrett (Fawkner Cemetery); a moderate, he was known to abhor strikes. As president his strength was as an organiser and he assisted with setting up numerous wages boards for some sixty unions. Barker went on to serve as a member of the North Melbourne City Council (1901-05) and was behind the amalgamation with the Melbourne City Council during a short stint as mayor (Sep-Oct 1905). He was later elected to the Commonwealth Senate (1910-19, 1922-24) after a number of unsuccessful attempts (1901, 1903 and 1906), only to see the party split during the anti-conscription debates of the Great War and was a member of the parliamentary delegation to France.

“Rotund and ruddy-faced”, Barker was similar in appearance to the author Rolf Boldrewood (q.v.); he died from cancer on 21 June 1924 aged 79 and resided at 171 Hotham Street, East St. Kilda.  Many Labour dignitaries attended Barker’s funeral, among them Senator (Sir) George Pearce (1870-1952) who commented “his death removes an interesting figure from the political history of this country”.

(By permission of the National Library of Australia, nla.pic-an22922433)